Nearly one-third of states (16 of 51) reported counting nongovernmental third-party expenditures toward their states' required spending level under the Temporary Assistance for Needy Family (TANF) block grant in fiscal year 2015, according to GAO's survey of all state TANF directors. TANF requires states to maintain a significant portion of their own historic financial commitment, called maintenance of effort (MOE), to welfare-related programs. In addition to its own spending, a state may count toward its MOE requirement certain in-kind or cash expenditures by nongovernmental third parties—such as food banks—as long as these services are allowable under TANF, are provided to needy families, and the state meets other requirements. The number of states counting such expenditures as MOE spending increased substantially between fiscal years 2009 and 2010, perhaps in part due to requirements necessary to obtain additional funding under the American Recovery and Reinvestment Act of 2009 (Recovery Act). After fiscal year 2010, the number of states counting nongovernmental third-party expenditures toward their TANF MOE requirements fell, but remained higher than pre-Recovery Act levels for other reasons. States that reported such expenditures as TANF MOE spending cited reasons such as developing public-private partnerships and meeting state MOE requirements. 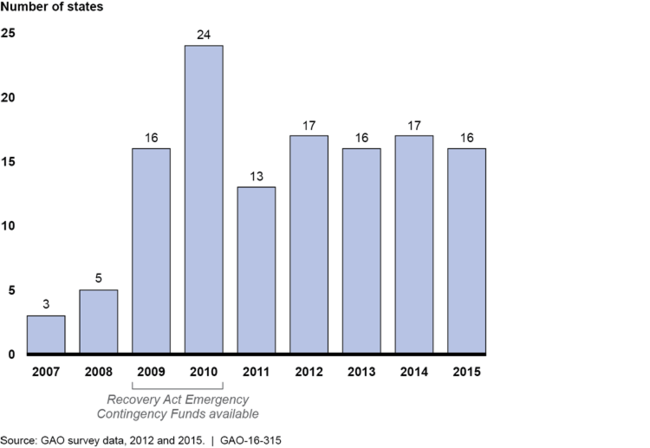 Of the 16 states that reported counting nongovernmental third-party expenditures as TANF MOE spending in fiscal year 2015, most said the types of services they counted involved food assistance and programs serving youth, according to GAO's survey. For example, one state reported working with a food bank to count the value of the food the bank provided to families deemed needy under state TANF rules.

Each year, TANF block grants, which are overseen by the U.S. Department of Health and Human Services (HHS), provide $16.5 billion in federal funds to states to assist low-income families. States are also required to spend a significant amount of their own funds under TANF, but they can include certain expenditures made by nongovernmental third parties toward their MOE requirement. Some stakeholders support this option because it helps states meet MOE requirements, but others question whether this approach is consistent with program goals. GAO was asked to update the information presented in its 2012 report on this topic (GAO-12-929R).

GAO is not making recommendations in this report. HHS agreed with the findings, and provided written comments on the report.