Indonesia. In 2014, China's imports from, and exports to, Indonesia exceeded the United States' (see figure). The United States and China compete more often with other countries than with each other in goods exported to Indonesia and win contracts in different sectors. In contrast to the United States, which is not involved in a free trade agreement (FTA) with Indonesia, China is a party to a regional FTA that includes Indonesia and is negotiating the Regional Comprehensive Economic Partnership (RCEP) with Indonesia and 14 other countries. In fiscal years 2009 through 2014, U.S. agencies' financing for exports to, and investment in, Indonesia totaled about $2.5 billion, compared with at least $34 billion in Chinese financing, according to the Department of State. In 2007 through 2012, U.S. foreign direct investment (FDI) of $9.6 billion exceeded China's reported $2.7 billion, according to available data.

Vietnam. In 2014, U.S. imports from Vietnam exceeded China's, while Chinese exports to Vietnam exceeded U.S. exports (see figure). As in Indonesia, the United States and China compete more often with other countries than with each other in goods exported to Vietnam and win contracts in different sectors. The United States and Vietnam are both participants in the proposed regional Trans-Pacific Partnership, while China and Vietnam are both parties to a regional FTA and the RCEP negotiations. In fiscal years 2009 through 2014, U.S. agencies' financing for exports to, and investment in, Vietnam totaled about $205 million, compared with at least $4.5 billion in Chinese financing, according to the Department of State. In 2007 through 2012, China's reported FDI of $1.2 billion was more than twice the United States' reported FDI of $472 million, according to available data. 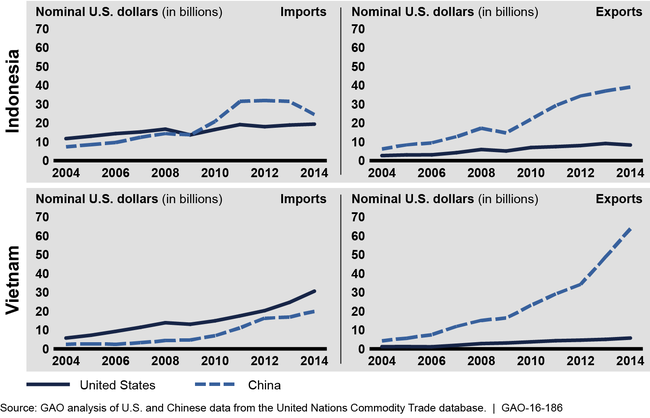 The United States and China have each sought to increase their economic engagement in Southeast Asia. U.S. agencies have identified Indonesia and Vietnam as important emerging U.S. partners that contribute to regional stability and prosperity. Indonesia has the world's 10th largest economy in terms of purchasing power, and Vietnam is one of the most dynamic economies in East Asia. Both the United States and China have established comprehensive partnerships with each country that are designed to enhance their bilateral cooperation in key areas.

GAO was asked to examine the United States' and China's economic engagement in Southeast Asia. GAO issued a report on 10 Southeast Asian countries in August 2015. In this report, GAO presents case studies for two of these countries, Indonesia and Vietnam, providing greater detail about the United States' and China's trade and investment, competition, and actions to further economic engagement in the two countries. GAO analyzed publicly available economic data and documentation from 10 U.S. agencies and the Chinese government. The data that GAO reports have varying time periods because of the data sets' limited availability and differing contexts. GAO interviewed U.S., Indonesian, and Vietnamese officials and private sector representatives.

This is the public version of a sensitive but unclassified report that is being issued concurrently. GAO is not making any recommendations in this report.