Annual federal appropriations to the Environmental Protection Agency's (EPA) Superfund program generally declined from about $2 billion to about $1.1 billion in constant 2013 dollars from fiscal years 1999 through 2013. EPA expenditures—from these federal appropriations—of site-specific cleanup funds on remedial cleanup activities at nonfederal National Priorities List (NPL) sites declined from about $0.7 billion to about $0.4 billion during the same time period. Remedial cleanup activities include remedial investigations, feasibility studies, and remedial action projects (actions taken to clean up a site). EPA spent the largest amount of cleanup funds in Region 2, which accounted for about 32 percent of cleanup funds spent at nonfederal NPL sites during this 15-year period. The majority of cleanup funds was spent in seven states, with the most funds spent in New Jersey—over $2.0 billion in constant 2013 dollars, or more than 25 percent of cleanup funds. 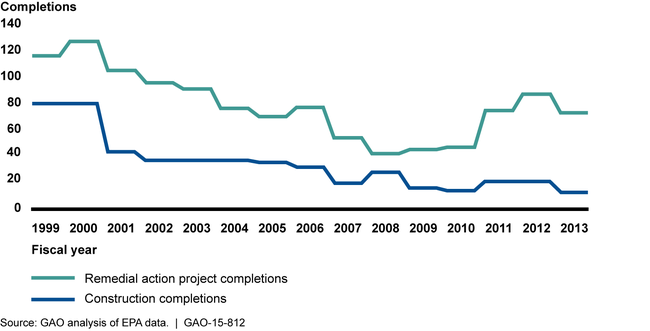 Under the Superfund program, EPA places some of the most seriously contaminated sites on the NPL. At the end of fiscal year 2013, nonfederal sites made up about 90 percent of these sites. At these sites, EPA undertakes remedial action projects to permanently and significantly reduce contamination. Remedial action projects can take a considerable amount of time and money, depending on the nature of the contamination and other site-specific factors. In GAO's 2010 report on cleanup at nonfederal NPL sites, GAO found that EPA's Superfund program appropriations were generally declining, and limited funding had delayed remedial cleanup activities at some of these sites.

GAO was asked to review the status of the cleanup of nonfederal NPL sites. This report examines, for fiscal years 1999 through 2013, the trends in (1) the annual federal appropriations to the Superfund program and EPA expenditures for remedial cleanup activities at nonfederal sites on the NPL; and (2) the number of nonfederal sites on the NPL, the number of remedial action project completions, and the number of construction completions at nonfederal NPL sites. GAO analyzed Superfund program and expenditure data from fiscal years 1999 through 2013 (most recent year with complete data available), reviewed EPA documents, and interviewed EPA officials.

GAO is not making any recommendations in this report. EPA agreed with GAO's findings.