The United States is a party to, or is currently negotiating, international agreements covering government procurement with 60 countries. From 2008 through 2012 these countries together spent on average about $4.4 trillion annually to procure goods and services and to fund capital projects. This represented about a quarter of their total general government expenditures, and includes spending at the central, state, and local levels. As shown in the figure below, the United States ($1.7 trillion) and European Union ($1.6 trillion) have the largest government procurement markets of countries covered by the World Trade Organization (WTO) Agreement on Government Procurement (GPA), existing U.S. free trade agreements (FTA), the Trans-Pacific Partnership (TPP) negotiations, or the Transatlantic Trade and Investment Partnership (T-TIP) negotiations. 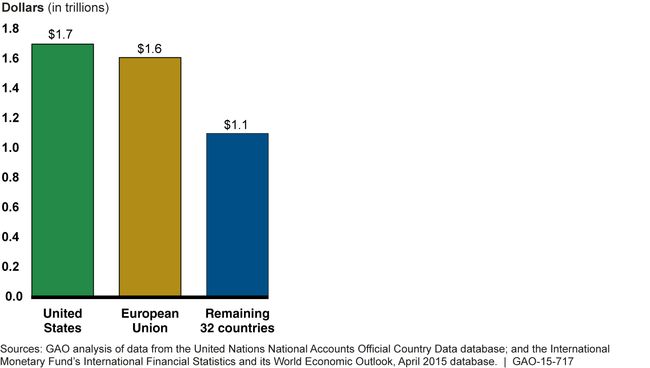 Note: The reported value for “Remaining 32 countries” is the mean of a GAO estimate of government procurement that ranged from $1.0 trillion and to $1.3 trillion.

From 2008 through 2012, annual procurement of countries covered under the GPA was about $2.5 trillion, excluding the United States. In comparison, countries with which the United States has FTAs, including some that are also covered by the GPA, have a total annual procurement of about $500 billion to $660 billion. For TPP and T-TIP countries, potential trade opportunities for U.S. firms could arise from the United States negotiating for commitments to increase the scope of covered procurements in the 56 countries covered by existing agreements. Increased opportunities could also come from adding new countries, however, only four of the TPP and T-TIP countries are not already covered by an FTA or the GPA; these four countries have an overall average annual government procurement market of no more than $60 billion.

As part of a larger request for information on U.S. participation in international procurement agreements, GAO was asked to provide information on the size of government procurement markets. GAO used macroeconomic data from 2008 through 2012 from the United Nations National Accounts Official Country Data database, which were the most recent, complete, and comparable macroeconomic data available, to estimate each country's general government procurement. GAO also interviewed officials from the Office of the United States Trade Representative and the Department of Commerce to gain an understanding of the procurement data available for analysis. These officials provided technical comments in response to a draft of this report, which GAO incorporated as appropriate.