The Department of State (State) has developed a six-step process for designating foreign terrorist organizations (FTO) that involves other State bureaus and agency partners in the various steps. State's Bureau of Counterterrorism (CT) leads the designation process for State. CT monitors terrorist activity to identify potential targets for designation and also considers recommendations for potential targets from other State bureaus, federal agencies, and foreign partners. After selecting a target, State follows a six-step process to designate a group as an FTO, including steps to consult with partners and draft supporting documents. During this process, federal agencies and State bureaus, citing law enforcement, diplomatic, or intelligence concerns, can place a “hold” on a potential designation, which, until resolved, prevents the designation of the organization. The number of FTO designations has varied annually since 1997, when 20 FTOs were designated. As of December 31, 2014, 59 organizations were designated as FTOs, with 13 FTO designations occurring between 2012 and 2014.

Number of Designated Foreign Terrorist Organizations, 1997 through 2014, by Year of Designation 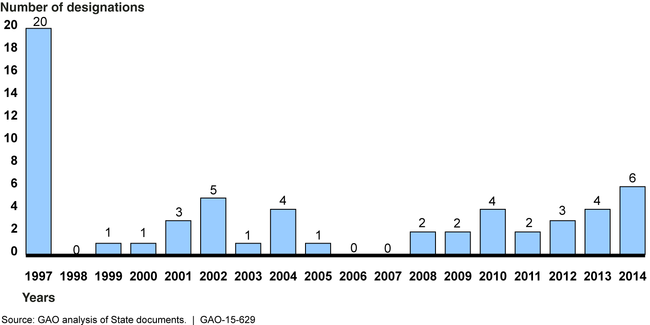 State considered input provided by other State bureaus and federal agencies for all 13 of the FTO designations made between 2012 and 2014, according to officials from the Departments of Defense, Homeland Security, Justice, State, and the Treasury, and the Office of the Director of National Intelligence, and GAO review of agency documents. For example, State used intelligence agencies' information on terrorist organizations and activities to support the designations.

U.S. agencies reported enforcing FTO designations through three key legal consequences—blocking assets, prosecuting individuals, and imposing immigration restrictions—that target FTOs, their members, and individuals that provide support to those organizations. The restrictions and penalties that agencies reported imposing vary widely. For example, as of 2013, Treasury has blocked about $22 million in assets relating to 7 of 59 designated FTOs.

The Secretary of State, in consultation with the Secretary of the Treasury and the Attorney General, has the authority to designate a foreign organization as an FTO. Designation allows the United States to impose legal consequences on the FTO or on individuals who support the FTO. As of June 1, 2015, 59 organizations were designated as FTOs.

To address these objectives, GAO reviewed and analyzed agency documents and data, and interviewed officials from Departments of Defense, Homeland Security, Justice, State, and the Treasury, as well as the intelligence community.

Separately, GAO also reviewed the duration of the designation process for FTOs designated between 2012 and 2014. That information was published in April 2015 in a report for official use only.