Federal Spending on the Five Largest Programs from Fiscal Year 1995 to 2014, Adjusted to 2014 Dollars 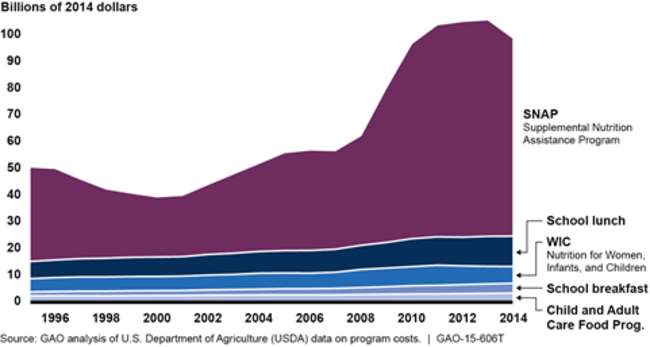 Federal food assistance is provided through a decentralized system that involves multiple federal, state, and local organizations. The complex network of 18 food assistance programs, administered by three federal agencies, emerged piecemeal over several decades to meet various needs. In 2010, research GAO reviewed suggested that participation in seven of these programs was associated with positive outcomes, such as improving nutrition among low-income households. Little was known about the effectiveness of the remaining 11.

In 2010, GAO recommended that USDA identify and develop methods for addressing potential inefficiencies among food assistance programs and reducing overlap among the smaller programs. GAO found that some programs provide comparable benefits to a similar population, but are managed separately, which is a potentially inefficient use of federal funds. In 2013, USDA commissioned a study on the feasibility and potential cost to assess the extent of overlap and duplication among these programs and, based on the results, decided to study the impact of participation in multiple food assistance programs on the nutritional status of participants. While such a study will provide important information, it does not address GAO's recommendation. GAO continues to believe that further action is needed. For example, USDA could convene a group of experts to discuss potential inefficiencies and overlap, such as administrative costs across multiple agencies, and develop proposals to address them.

The federal government spends billions of dollars each year on food and nutrition programs. USDA administers most of these programs.

This testimony provides: (1) an overview of domestic food assistance programs, and (2) an update on past GAO recommendations in this area. It is based largely on an April 2010 report ( GAO-10-346 ) and a 2015 update on actions USDA has taken to address that report's recommendation. To develop the findings for the 2010 report, GAO analyzed program spending data and studies on program effectiveness, reviewed relevant federal laws and regulations, interviewed relevant experts and officials, and conducted site visits in five states, selected for diversity in geography and service delivery models. For the 2015 update, GAO analyzed federal spending and program participation data.

In April 2010, GAO recommended that the Secretary of Agriculture take action to address potential inefficiency and overlap among food assistance programs while ensuring those who are eligible receive the assistance they need. USDA has taken some action but has not fully addressed this recommendation. GAO believes more can be done in response to this recommendation.