The National Oceanic and Atmospheric Administration (NOAA)'s Geostationary Operational Environmental Satellite-R (GOES-R) program has made major progress in developing its first satellite, including completing testing of satellite instruments. However, the program continues to face challenges in the areas of schedule, cost, and functionality. Specifically, the program has continued to experience delays in major milestones and cost overruns on key components. Also, in order to meet the planned launch date, the program has deferred some planned functionality until after launch, and program officials acknowledge that they may defer more. 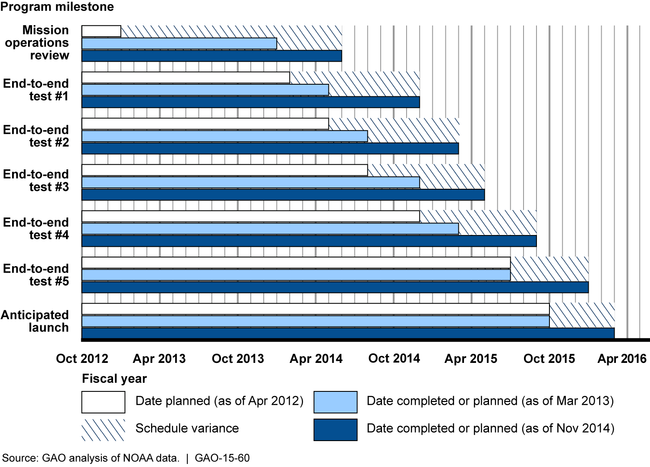 NOAA and its contractors have implemented a defect management process as part of their overall testing approach that allows them to identify, assess, track, resolve, and report on defects. However, shortfalls remain in how defects are analyzed and reported. For example, contractors manage, track, and report defects differently due to a lack of guidance from NOAA. Without consistency among contractors, it is difficult for management to effectively prioritize and oversee defect handling. In addition, more than 800 defects in key program components remained unresolved. Until the program makes progress in addressing these defects, it may not have a complete picture of remaining issues and faces an increased risk of further delays to the GOES-R launch date.

As the GOES-R program approaches its expected launch date of March 2016, it faces a potential gap of more than a year during which an on-orbit backup satellite would not be available. This means that if an operational satellite experiences a problem, there could be a gap in GOES coverage. NOAA has improved its plan to mitigate gaps in satellite coverage. However, the revised plan does not include steps for mitigating a delayed launch, or details on potential impacts and minimum performance levels should a gap occur. Until these shortfalls are addressed, NOAA management cannot fully assess all gap mitigation strategies, which in turn could hinder the ability of meteorologists to observe and report on severe weather conditions.

NOAA, with the aid of the National Aeronautics and Space Administration (NASA), is procuring the next generation of geostationary weather satellites. The GOES-R series is to replace the current series of satellites, which will likely begin to reach the end of their useful lives in 2015. This new series is considered critical to the United States' ability to maintain the continuity of satellite data required for weather forecasting through 2036.

GAO was asked to evaluate GOES-R. GAO's objectives were to (1) assess progress on program schedule, cost, and functionality; (2) assess efforts to identify and address issues discovered during integration and testing; and (3) evaluate the likelihood of a gap in satellite coverage and actions to prevent or mitigate such a gap. To do so, GAO analyzed program and contractor data, earned value data information, and defect reports, compared both defect management policies and contingency plans to best practices by leading organizations, and interviewed officials at NOAA and NASA.

GAO is recommending that NOAA address shortfalls in its defect management approach, reduce the number of open high-priority defects, and add information to its satellite contingency plan. NOAA concurred with GAO's recommendations and identified steps it plans to take to implement them.