Although federal funding for autism research fluctuated from fiscal years 2008 through 2012, it increased overall during this period, from approximately $169 million in fiscal year 2008 to $245 million in fiscal year 2012—about a 45 percent increase (about a 37 percent increase when adjusted for inflation to fiscal year 2012 dollars). Over this time period, the National Institutes of Health (NIH) consistently provided the majority of autism research funding—between about 76 and 83 percent of the total funding awarded each fiscal year. The highest funding levels were in fiscal years 2009 and 2010, in part, as a result of additional funds appropriated to NIH under the American Recovery and Reinvestment Act of 2009. While overall funding increased, federal funding varied by each of the seven research areas specified in the Interagency Autism Coordinating Committee’s (IACC) strategic plan. These research areas are biology, treatments and interventions, causes, diagnosis, infrastructure and surveillance, services, and lifespan issues. The following figure shows the changes in funding by fiscal year for each of the seven research areas, as well as the overall average annual percent change in funding for each research area. 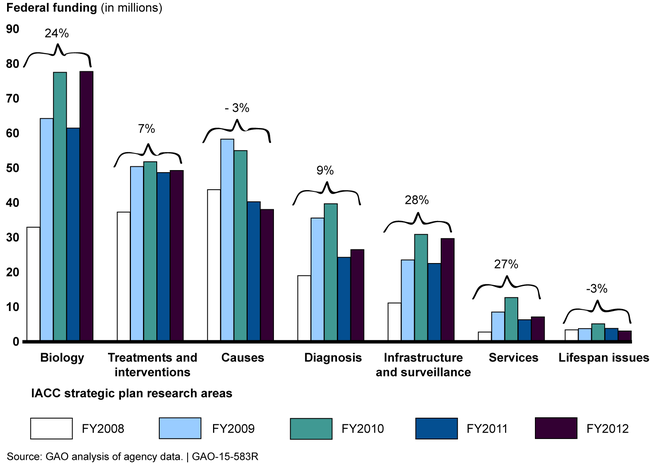 Note: The research areas noted in the figure were established by the Interagency Autism Coordinating Committee’s (IACC) strategic plan. The federal agencies that funded autism research during the time period are the Department of Defense; Department of Education; Environmental Protection Agency; National Science Foundation; and seven agencies within the Department of Health and Human Services: Administration for Children and Families, Agency for Healthcare Research and Quality, Centers for Disease Control and Prevention, Centers for Medicare & Medicaid Services, Health Resources and Services Administration, National Institutes of Health, and the Substance Abuse and Mental Health Services Administration. In this figure, all dollars are expressed in nominal terms.

The Centers for Disease Control and Prevention (CDC) estimates that about 1 in 68 children have been identified as having autism—a developmental disorder involving communication and social impairment. According to CDC, there are likely many causes of autism and many factors, including environmental, biologic, and genetic, that may make a child more likely to have autism. There is no known cure for autism; however,research shows that early intervention can greatly improve a child’s development. From fiscal years 2008 through 2012, 11 federal agencies awarded approximately $1.2 billion to fund autism research.

GAO was asked to examine federal autism research funding. In this report, GAO describes how the amount of federal funding in each of the research areas specified in the IACC’s strategic plan changed from fiscal years 2008 through 2012. GAO analyzed data previously collected for GAO-14-16, Federal Autism Activities: Better Data and More Coordination Needed to Help Avoid the Potential for Unnecessary Duplication, including updated data, to identify changes in agency funding awarded from fiscal years 2008 through 2012. Data by strategic plan research area for fiscal years 2013 and 2014 are not currently available. To calculate the changes in federal autism funding awarded, GAO analyzed the data by IACC strategic plan research area, including any growth or decreases in each area by fiscal year and agency.