Seven federal agencies invested—that is, conducted or funded—approximately $2.89 billion in regenerative medicine research in fiscal years 2012 through 2014. Most (88 percent) was invested by the National Institutes of Health. Agencies funded research related to their missions, including basic research to enhance general scientific knowledge, clinical research to move scientific discoveries into practical applications, and research to develop regulatory science. 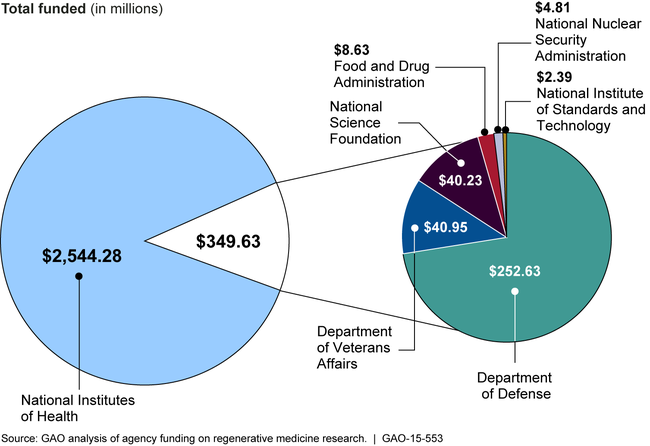 These agencies have established mechanisms for sharing information on the wide array of research they fund. These mechanisms include participating in regular meetings of an interagency working group, cofunding research, and cosponsoring workshops. Although some nonfederal stakeholders expressed a desire for greater coordination of federal regenerative medicine activities, agency officials reported that the current approach to sharing information is appropriate given the diverse missions of the agencies involved, the broad range of research conducted in this field, and the variety of diseases and conditions that may benefit from new discoveries.

Agency officials and nonfederal stakeholders have identified a variety of challenges in advancing regenerative medicine. These include establishing effective collaborations between federal and nonfederal stakeholders; recruiting scientists versed in regenerative medicine to become federal employees; navigating the regulatory review and product approval process; and making decisions about Medicare coverage and reimbursement rates, mechanisms, and processes for newly approved products. Some steps have been taken to address these challenges, including recruiting postdoctoral fellows and providing training for them specifically to build the needed mix of interdisciplinary skills for research in regenerative medicine to address workforce challenges.

Regenerative medicine is an interdisciplinary field with a focus on conducting research and developing treatments for a vast assortment of previously untreatable diseases and conditions through self-healing—a process by which the body uses its own systems to recreate cells and rebuild tissues and organs.

In commenting on a draft of this report, the federal agencies that conduct, fund, or otherwise play a role in regenerative medicine research provided technical comments, which GAO incorporated where appropriate.