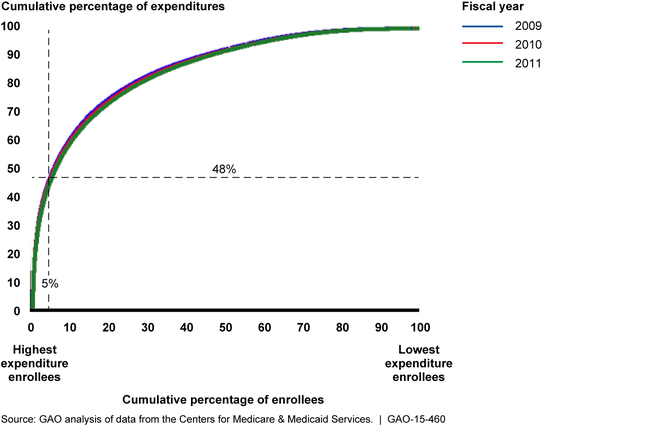 Of the Medicaid-only enrollees who were among the 5 percent with the highest expenditures within each state, the nationwide proportions of these enrollees in different eligibility groups (such as the disabled or children) and with certain conditions (such as asthma) or services (such as childbirth or delivery) were also consistent from fiscal years 2009 through 2011.

The distribution of high-expenditure Medicaid-only enrollees' expenditures among categories of service in fiscal year 2011 varied widely across states. Expenditures for managed care and premium assistance varied most widely (from 0 to 75 percent).

Studies on healthcare spending generally find that a small percentage of individuals account for a large proportion of expenditures, and Medicaid—a federal-state health financing program for low-income and medically needy individuals—is no exception. Medicaid expenditures for fiscal year 2013 totaled about $460 billion, covering about 72 million enrollees, some of whom were also eligible for Medicare. More information about Medicaid enrollees who are not also eligible for Medicare (i.e., Medicaid-only enrollees) and who account for a high proportion of expenditures could enhance efforts to manage expenditures and facilitate improvements to care.

GAO analyzed data from the Medicaid Statistical Information System Annual Person Summary File for fiscal years 2009, 2010, and 2011, the most recent years for which data from almost all states were available.