The Capital Master Plan (CMP) intended to modernize, secure, and restore the United Nations (UN) Headquarters Complex, is substantially complete. However, the project is 3 years behind schedule primarily due to unplanned security upgrades and is projected to be over budget, while the UN has removed two buildings from its scope due to lack of a feasible solution to security concerns. As of February 2015, the UN estimated that the CMP will cost about $379 million more than originally planned. In resolutions passed in December 2013 and April 2015, the UN General Assembly authorized financing of the CMP cost overrun through various means, including an additional member state assessment. 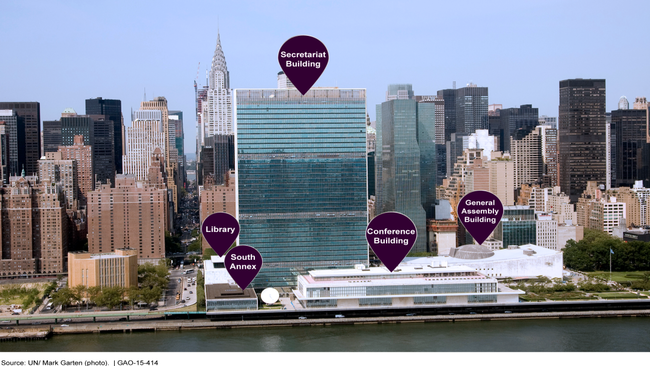 UN internal and external auditors have identified lessons learned from the CMP that could be applied to future capital projects, such as including all foreseeable costs at a project's outset. The UN is applying some of these lessons to a new capital improvement project in Geneva. However, the UN has not made these lessons standard practice as called for by federal and UN standards for internal control. As a result, the UN could miss the opportunity to apply its experience to help achieve long-term savings and efficiencies in future capital improvement efforts.

The UN has identified as viable three options to address its future office space needs in New York, including a new building within the UN Headquarters Complex, a new building south of the UN Complex, and the status quo—relying on leased space. However, GAO found the assumptions upon which the UN bases these options—including UN workforce projections and the potential impact of flexible workplace policies such as teleworking or desk sharing—are not well supported and documented. Without an understanding of the methodology and calculations underlying the assumptions, UN decision makers may have difficulties deciding which options will achieve the most efficient and effective allocation of resources in the coming years.

In December 2006, the UN approved a $1.88 billion plan to modernize its headquarters by 2014 (the CMP project), including renovating five buildings. In a separate effort, the UN is considering options to address its future needs for office space. As the UN's largest financial contributor, the United States has a significant interest in these projects.

GAO was asked to review progress on these efforts. GAO examined (1) the extent to which the CMP is on schedule and achieving its originally planned scope of work within budget, (2) the UN's application of lessons learned from the CMP to other UN capital projects, and (3) how the UN determines and plans to address future office space needs at its headquarters. To perform this work, GAO reviewed CMP schedule, planning, budget, and cost documents; examined relevant UN General Assembly resolutions; and met with officials from the Department of State and relevant UN offices.

The Secretary of State and the U.S. Permanent Representative to the United Nations should work with other member states to (1) ensure that lessons learned during the CMP are used to develop documented guidance for future capital projects and (2) clearly justify assumptions used to estimate future office space needs, for example, by documenting the underlying factors, data, and analyses.

The Department of State concurred with GAO's recommendations.