Trends in the Number of Offenders under the U.S. Parole Commission's (USPC) Jurisdiction from Fiscal Years 2002 through 2014 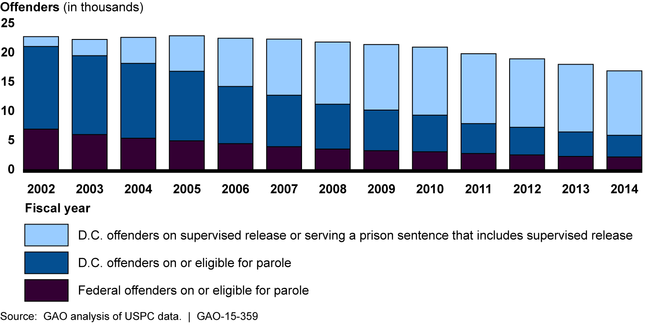 We identified 17 criminal justice entities with the potential to assume USPC's jurisdiction for D.C. offenders; however none currently possesses the three key organizational characteristics. Thus, transferring jurisdiction is not feasible without altering an existing or establishing a new entity, and would pose challenges related to estimating costs and assessing impacts on decision making.

USPC was established in 1976, in part to carry out a national parole policy that would govern the release of offenders to community supervision prior to completing their full custody sentences. USPC's budget is just over $13 million for fiscal year 2015.

Over time, changes in laws have abolished parole and introduced supervised release—a new form of postincarceration supervision. As a result, USPC has been reauthorized and has authority to grant and revoke parole for eligible federal and D.C. offenders and to revoke supervised release for D.C. offenders violating the terms of their release. USPC's current authorization is set to expire in 2018.

This report addresses (1) changes in the number of offenders under USPC's jurisdiction from fiscal years 2002 through 2014 and (2) the organizational characteristics needed for an entity to feasibly assume jurisdiction of D.C. offenders from USPC, and the feasibility and implications of such a transfer.

GAO analyzed USPC data on federal and D.C. offenders from fiscal years 2002-2014—the most recent years for which reliable data were available—as well as DOJ reports on USPC and USPC policies, and determined that the data were sufficiently reliable for our purposes. GAO also discussed with USPC and some of its criminal justice partners the feasibility of transferring USPC's jurisdiction for D.C. offenders and any related challenges.