Most of more than 9,800 claims filed with the National Vaccine Injury Compensation Program (VICP) since fiscal year 1999 have taken multiple years to adjudicate (see fig.). More than 1,000 (11 percent) of claims filed since fiscal year 1999 were still in process (pending) as of March 31, 2014; most of these were pending for 2 years or less. A greater percentage of the claims filed since fiscal year 2009 were resolved within 1 or 2 years. In all but 1 year since fiscal year 2009, the program has met the target for the average time to adjudicate claims (about 3.5 years) tracked by the Department of Health and Human Services (HHS), which administers the program. Officials from the U.S. Court of Federal Claims (USCFC), where VICP claims are adjudicated, report that delays may occur while petitioners gather evidence for their claims. Since 2006, about 80 percent of compensated claims have been resolved through a negotiated settlement. 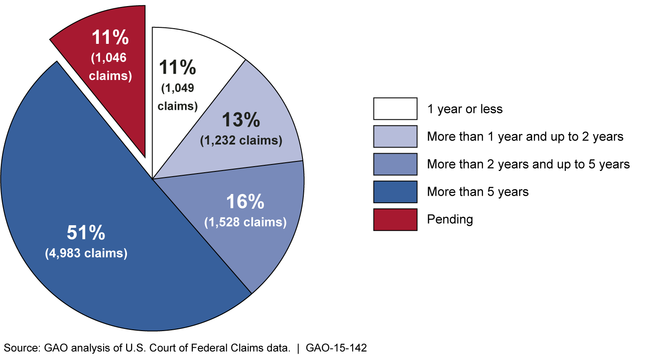 Since fiscal year 1999, HHS has added six vaccines to the vaccine injury table, but it has not added covered injuries associated with these vaccines to the table. This means that while individuals may file VICP claims for these vaccines, each petitioner must demonstrate that the vaccine that was administered caused the alleged injury. HHS is considering adding covered injuries associated with these vaccines; but as of September 2014, it had not published any final rules to do so.

The balance of the Vaccine Injury Compensation Trust Fund, managed by the Department of the Treasury (Treasury) increased from $2.9 billion in fiscal year 2009 to nearly $3.3 billion at the end of fiscal year 2013 as the trust fund's income (from net revenues from vaccine excise taxes and interest on investments) outpaced its disbursements to HHS, USCFC, and the Department of Justice (DOJ), which represents HHS in VICP proceedings. VICP compensation, funded by the trust fund, increased from less than $126 million in each of fiscal years 1999 to 2009 to over $254 million in fiscal year 2013.

Vaccines save lives by preventing disease in the people who receive them. In some instances, however, a vaccine can have severe side effects, including death or an injury requiring lifetime medical care. VICP provides compensation to people for injuries and deaths associated with certain vaccines for medical and other costs. The program includes an injury table that lists the injuries that are presumed to be caused by vaccines covered by the program. The program may also compensate individuals for injuries not on the table; however, in those cases causation is not presumed. In both cases, medical and other records are required. VICP pays claims from a trust fund. Since the program began in 1988, it has awarded more than $2.8 billion in compensation.

GAO was asked to review the program. GAO examined (1) how long it has taken to adjudicate claims and how claims have been adjudicated, (2) the changes to the vaccine injury table, and (3) how the balance of and spending from the Vaccine Injury Compensation Trust Fund have changed, among other objectives.

GAO examined data and interviewed officials from HHS, DOJ, and USCFC, including data on claims filed since fiscal year 1999 and their status as of March 31, 2014; reviewed laws and agency documents; and reviewed Treasury data and agency data on compensation and obligations for other VICP-related expenses for fiscal years 2009 through 2013.

HHS and USCFC agreed with GAO's findings, and HHS, USCFC, DOJ, and Treasury provided technical comments that were incorporated as appropriate.