The Export-Import Bank of the United States (Ex-Im) has policies for monitoring the end use of defense articles and services it finances, including documentation requirements that are reflected in its financing agreements with borrowers. However, these policies do not specify what actions Ex-Im officials should take if the bank does not receive the required dual-use-related documents. The requirements for each transaction vary, but may include (1) progress reports on construction and delivery, (2) technical operating reports, and (3) an annual certification and report on end use. As of July 31, 2014, Ex-Im had received most of the information it required in its credit agreements regarding the three dual-use transactions it financed in fiscal year 2012, but some of the information it received was late (see figure). For example, Ex-Im received

some but not all of the progress reports required for the satellite transactions with Eutelsat and the Mexican government, and some information from the government of Mexico was more than a year late;

the required technical operating report from Eutelsat, but only one of the two required reports from the Mexican government; and

the annual certification and reports required from the governments of Mexico and Cameroon late.

Ex-Im officials told GAO they made efforts to obtain missing documentation for all three transactions, and, because of their prior vetting of the transactions and the details they had received, they did not think the missing documentation risked the exports being used in a lethal manner or for primarily military purposes. However, GAO found these efforts were often not timely or documented. Ex-Im therefore did not have complete and timely information about whether the items were actually being used in accordance with the terms of the agreements and Ex-Im policy.

Ex-Im did not finance any exports under its dual-use authority in fiscal year 2013, according to Ex-Im officials and Ex-Im authorizations data. 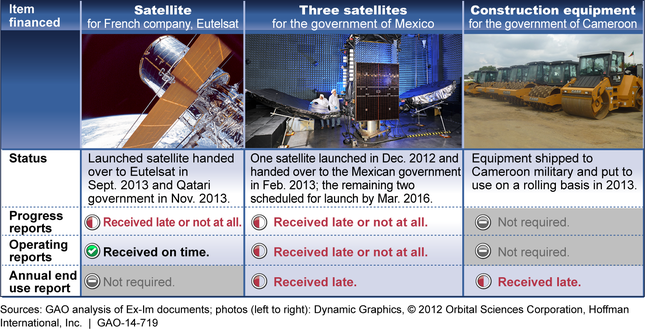 Since 1994, Ex-Im has had the authority to facilitate the financing of U.S. exports of defense articles and services, provided that it determines these items are nonlethal and primarily meant for civilian use. These “dual-use” exports include aircraft that are used by foreign militaries mainly for humanitarian purposes. After a 9-year hiatus, Ex-Im financed three dual-use exports in fiscal year 2012. These three transactions account for $1.03 billion, or just under 3 percent of Ex-Im's $35.8 billion financing for that year. Federal law requires GAO to report annually on the end uses of dual-use exports financed by Ex-Im during the second preceding fiscal year. This report (1) examines how Ex-Im has complied with its requirements for monitoring the end uses of the dual-use exports it financed in fiscal year 2012 and (2) identifies what dual-use exports, if any, Ex-Im financed in fiscal year 2013.

To improve oversight for monitoring dual-use items, Ex-Im should strengthen its guidance for monitoring end use in cases where borrowers do not submit required documentation within specified time frames. Ex-Im agreed with GAO's recommendation and said it would revise its guidance.