Since 2003, GAO has identified numerous challenges related to U.S. efforts in Afghanistan. Among the various challenges that GAO and others have identified, are the following: the dangerous security environment, the prevalence of corruption, and the limited capacity of the Afghan government to deliver services and sustain donor-funded projects. As illustrated in the figure below, between fiscal years 2002 and 2013, U.S. agencies allocated nearly $100 billion toward U.S. efforts in Afghanistan.

Breakout of U.S. Allocations for Efforts in Afghanistan, Fiscal Years 2002-2013 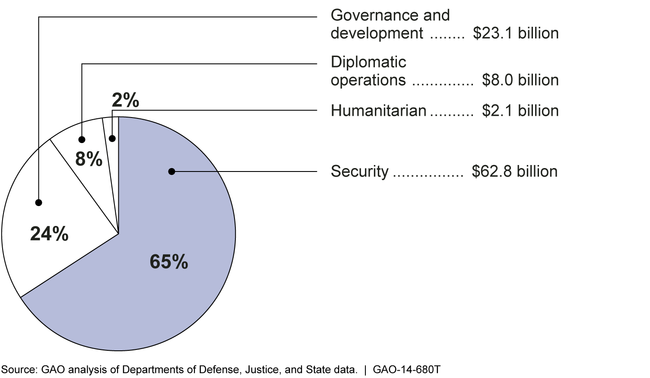 Note: This figure does not include funding provided for U.S. military or other operations in Afghanistan. Percentages may not add up to 100 as a result of rounding.

The United States, along with the international community, has focused its efforts in areas such as building the capacity of Afghan ministries to govern and deliver services, developing Afghanistan's infrastructure and economy, and developing and sustaining the Afghan National Security Forces. In multiple reviews of these efforts, GAO has identified numerous shortcomings and has made recommendations to the agencies to take corrective actions related to (1) mitigating the risk of providing direct assistance to the Afghan government, (2) oversight and accountability of U.S. development projects, and (3) estimating the future costs of sustaining Afghanistan's security forces which the United States and international community have pledged to support.

In February 2013, GAO reported that while the circumstances, combat operations, and diplomatic efforts in Iraq differ from those in Afghanistan, potential lessons could be learned from the transition from a military- to a civilian-led presence to avoid possible missteps and better utilize resources. As GAO has reported, contingency planning is critical to a successful transition and to ensuring that there is sufficient oversight of the U.S. investment in Afghanistan. This is particularly vital given the uncertainties of the U.S.-Afghanistan Bilateral Security Agreement and the ultimate size of the post-2014 U.S. presence in Afghanistan.

The U.S. government has engaged in multiple efforts in Afghanistan since declaring a global war on terrorism that targeted al Qaeda, its affiliates, and other violent extremists, including certain elements of the Taliban. These efforts have focused on a whole-of-government approach that calls for the use of all elements of U.S. national power to disrupt, dismantle, and defeat al Qaeda and its affiliates and prevent their return to Afghanistan. This approach, in addition to security assistance, provided billions toward governance and development, diplomatic operations, and humanitarian assistance.