GAO's review of 294 approved Medicaid nursing home applications in three states showed that 41 percent of applicants had total resources—both countable and not countable as part of financial eligibility determination—of $2,500 or less and 14 percent had over $100,000 in total resources. 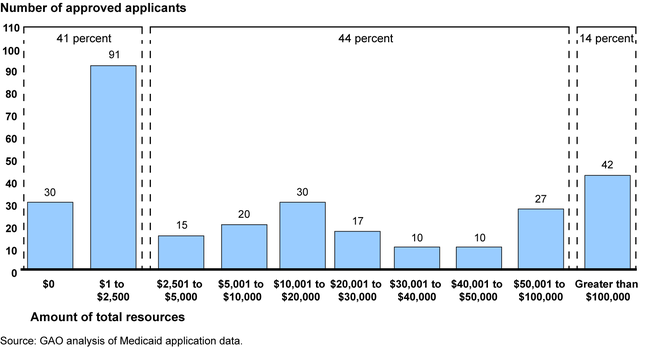 Note: Data were from applications submitted during state fiscal year 2012 or between July 1, 2012, and December 31, 2012. Amount of resources may be understated as the value of certain resources was not available. For two applicants, no values were available, thus percentages do not add to 100.

1.  spending countable resources on goods and services that are not countable towards financial eligibility, such as prepaid funeral arrangements;

3.  giving away countable assets as a gift to another individual—such gifts could lead to a penalty period that delays Medicaid nursing home coverage; and

4.  for married applicants, increasing the amount of assets a spouse remaining in the community can retain, such as through the purchase of an annuity.

Eligibility workers GAO spoke with identified bank statements as the most useful source of information for assessing financial eligibility. They explained that bank statements could lead to the identification of unreported assets, such as life insurance policies, or show patterns of withdrawals that prompt further inquiry.

Medicaid paid for nearly one-third of the nation's $158 billion in nursing home expenditures in 2012. To be financially eligible for Medicaid, individuals cannot have assets above certain limits. Not all assets are countable in determining Medicaid eligibility; federal law discourages individuals from reducing their countable assets, for example by transferring them to family members, to qualify for Medicaid. Although Congress has acted multiple times to address financial eligibility requirements for Medicaid coverage of nursing home care, methods exist through which individuals, sometimes with the help of attorneys, can reduce their assets and qualify for Medicaid.

GAO was asked for information on the extent to which individuals may be using available methods to qualify for Medicaid coverage. GAO (1) examined financial characteristics of applicants approved for Medicaid nursing home coverage in selected states; (2) identified methods used to reduce countable assets to qualify for Medicaid; and (3) identified information eligibility workers consider the most useful in assessing applicants' financial eligibility. GAO analyzed a random, but nongeneralizeable, sample of Medicaid nursing home applications in two counties in each of three states (Florida, New York, and South Carolina), selected based on several factors including states' asset verification efforts and demographics. GAO also interviewed officials from the Centers for Medicare & Medicaid Services, state Medicaid officials, county-based Medicaid eligibility workers, and attorneys.