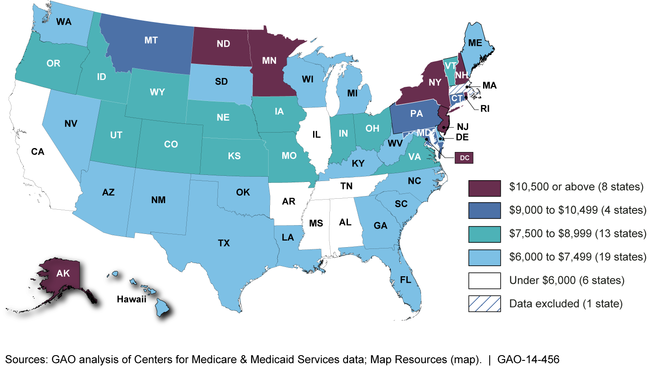 Notes: Spending per enrollee includes federal and state spending on regular Medicaid payments for covered services, as well as supplemental payments, such as payments to hospitals for low-income patients, but does not include administrative costs. Estimates also do not reflect states' subsequent changes to the spending originally reported for this year. Enrollment is measured in terms of full-year-equivalent enrollees, regardless of scope of benefits. Massachusetts was excluded because of errors in fiscal year 2008 CMS data for this state.

Although estimates of spending per enrollee are based on the best data readily available from CMS, these data do not permit full assessment of state spending variation. Limitations include the difficulty of determining spending on services enrollees received during a particular time period and lack of complete, accurate information about supplemental payments. GAO has previously recommended that CMS take steps to improve states' reporting of supplemental payments and that Congress consider requiring CMS to take such steps.

Certain factors that influence overall per-enrollee Medicaid spending, such as distribution of enrollees among eligibility groups, enrollee health service needs, and scope of benefits offered, varied widely by state. For example, in calendar year 2008, the percentage of enrollees in higher-need eligibility groups—individuals who are disabled or aged—ranged from about 15 percent to 38 percent across states.

Federal Medicaid expenditures totaled about $267 billion in fiscal year 2013. With the expansion of Medicaid under the Patient Protection and Affordable Care Act and rising health care costs, the Congressional Budget Office projects that such expenditures will grow to about $576 billion by fiscal year 2024. GAO was asked to examine variation among states in Medicaid spending and factors that influence such spending, and state approaches to setting rates per enrollee for Medicaid managed care plans.