GAO found that the number of advanced diagnostic imaging (ADI) services provided to Medicare beneficiaries in the office setting—an indicator of access to those services—began declining before and continued declining after the accreditation requirement went into effect on January 1, 2012. In particular, the rate of decline from 2009 to 2010 was similar to the rate from 2011 to 2012 for magnetic resonance imaging (MRI); computed tomography (CT); and nuclear medicine (NM), including positron emission tomography (PET) services. These results suggest that the overall decline was driven, at least in part, by factors other than accreditation. The percentage decline in the number of ADI services provided in the office setting was generally similar in both urban and rural areas during the period GAO studied.

Number of Advanced Diagnostic Imaging Services in the Office Setting per 1,000 Medicare Fee-for-Service Beneficiaries, by Modality, 2009-2012 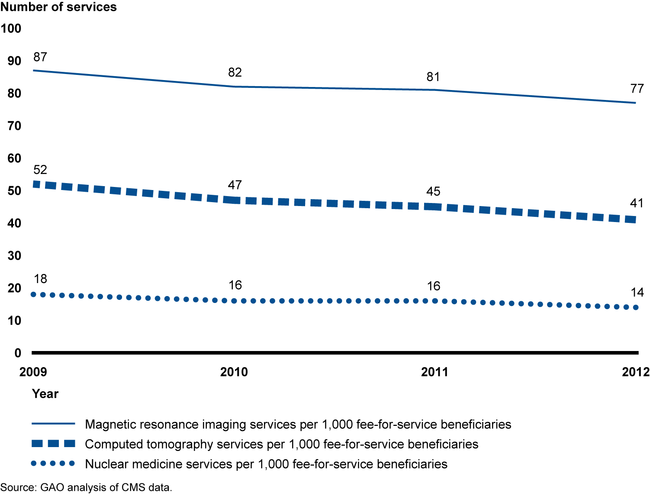 The effect of accreditation on access is unclear in the context of recent policy and payment changes implemented by Medicare and private payers. For example, the Centers for Medicare & Medicaid Services (CMS) reduced Medicare payment for certain CT and MRI services, which could have contributed to the decline in the number of these services. Officials from CMS, representatives from the accrediting organizations, and accredited ADI suppliers GAO interviewed suggested that any effect of the accreditation requirement on access was likely limited.

The Department of Health and Human Services stated that it had no comments on a draft of this report.

In this report, GAO examined the effect the accreditation requirement may have had on beneficiary access to ADI services provided in the office setting. To do this, GAO examined trends in the use of the three ADI modalities—CT; MRI; and NM, including PET—provided to Medicare beneficiaries from 2009 through 2012 that were subject to the ADI accreditation requirement. GAO also interviewed CMS officials, representatives of the Intersocietal Accreditation Commission and the American College of Radiology—the two CMS-approved accrediting organizations that accounted for about 99 percent of all accredited suppliers as of January 2013; and 19 accredited ADI suppliers that reflected a range of geographic areas, imaging services provided, and accrediting organizations used. In addition, GAO reviewed relevant literature to understand the context of any observed changes in ADI services throughout the period studied.