Number of Active Drug Shortages from January 2007 through June 2013 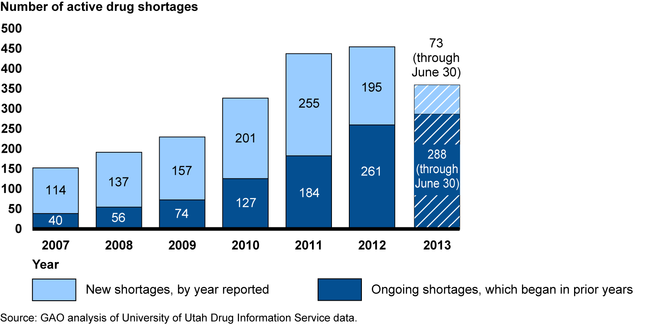 The immediate cause of drug shortages can generally be traced to a manufacturer halting or slowing production to address quality problems, triggering a supply disruption. Other manufacturers have a limited ability to respond to supply disruptions due to constrained manufacturing capacity. GAO's analysis of data from the Food and Drug Administration (FDA) also showed that quality problems were a frequent cause. GAO also identified potential underlying causes specific to the economics of the generic sterile injectable drug market, such as that low profit margins have limited infrastructure investments or led some manufacturers to exit the market.

While shortages have persisted, FDA has prevented more potential shortages in the last 2 years by improving its responsiveness. Among other things, FDA implemented Food and Drug Administration Safety and Innovation Act (FDASIA) requirements and recommendations GAO made in 2011. FDA has also initiated other steps to improve its response to shortages, such as developing procedures to enhance coordination between headquarters and field staff. However, there are shortcomings in its management of drug shortage data that are inconsistent with internal control standards. For example, FDA has not created policies or procedures governing the management of the data and does not perform routine quality checks on its data. Such shortcomings could ultimately hinder FDA's efforts to understand the causes of specific shortages as well as undermine its efforts to prevent them from occurring. In addition, FDA has not conducted routine analyses of the data to proactively identify and evaluate the risks of drug shortages.

From prolonged duration of a disease, to permanent injury, to death, drug shortages have led to harmful patient outcomes. FDA—an agency within the Department of Health and Human Services (HHS)—is responsible for protecting public health and works to prevent, alleviate, and resolve shortages. In 2011, GAO recommended that FDA should enhance its ability to respond to shortages. In 2012, FDASIA gave FDA new authorities to improve its responsiveness and mandated GAO to study drug shortages.

In this report, GAO (1) reviews the trends in recent drug shortages and describes what is known about their effect on patients and providers; (2) examines the causes of drug shortages; and (3) evaluates the progress FDA has made in addressing drug shortages. GAO analyzed data from FDA and the University of Utah Drug Information Service, which is generally regarded as the most comprehensive source of drug shortage information for the time period we reviewed. GAO interviewed officials from FDA and other federal agencies, organizations representing patients and providers, and drug manufacturers. GAO also reviewed the literature, relevant statutes, regulations, and documents.