However, electronics recycling is complex and faces challenges, such as a lack of profitability. Electronics require disassembly by hand or shredding and separation.

Emerging technologies could make it easier. For example, a manufacturer is piloting robotic disassembly for its products. Ultrasound is now widely used as a separation technology and new microorganisms are being developed in laboratories to separate high value materials in electronic waste.

Consumer electronics contain critical materials whose supplies are limited, including gold, platinum, and rare earth metals. Domestic recycling of consumer electronics could extend the supply and reduce the current U.S. reliance on imports. New technologies are becoming available, but electronics recycling is complex and faces challenges, such as narrow profit margins.

What is it? Recycling of consumer electronics—including smartphones, televisions, and computers—generally involves separating high-value metals from plastics and other low-value materials. Precious metals and rare earth metals are the economic driving force for consumer electronic recycling technology. These metals have high market values and limited supplies, and they can be reused across many industries, including the defense and energy sectors. Consumer electronic devices can also contain personally identifiable information (PII), including medical and financial data, which could be improperly disclosed if they are not destroyed prior to recycling. According to a study of selected consumer electronics, about 2.8 million tons were disposed of in the U.S. in 2017, of which about 36 percent was recycled. 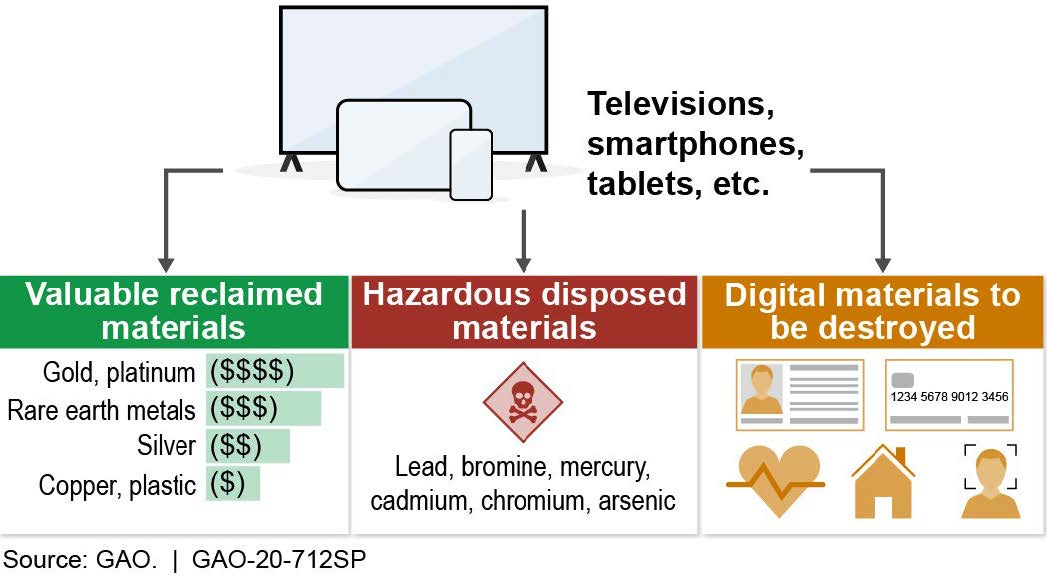 Figure 1. Selected valuable, hazardous, and digital materials contained within consumer electronics that can be recovered, disposed, or destroyed

How does it work? The high concentration of valuable material in certain consumer electronics is key to the economic viability of recycling these products. Cell phones, as one example, have more precious metal by weight than raw ore does. According to the EPA, 35,274 pounds of copper, 772 pounds of silver, and 75 pounds of gold can be recovered from a million recycled cell phones. Based on commodity market prices on August 12, 2020, these weights of metals are worth approximately $100,000, $290,000, and $2.1 million for copper, silver, and gold, respectively. In contrast, cathode ray tube (CRT) displays in older televisions and computer monitors have little recycling value, but they contain leaded glass and may be considered hazardous waste. In addition, recovery of certain valuable materials from consumer electronics is limited due to the high costs of technology and processing.

Electronics recycling companies disassemble devices by shredding, which also destroys PII, or by hand. These companies then separate valuable materials for reuse (including gold, silver, platinum, and rare earth metals) from toxic materials for disposal (including brominated materials and lead). Traditional methods include burning to remove non-metal parts and separation using strong acids.

New separation technologies are being used or piloted to recover precious and rare earth metals. For example, robotic disassembly uses machine learning and computer vision to more rapidly pick and sort items. Another new technology uses ultrasound to speed up the chemical removal of gold from cell phone SIM cards. 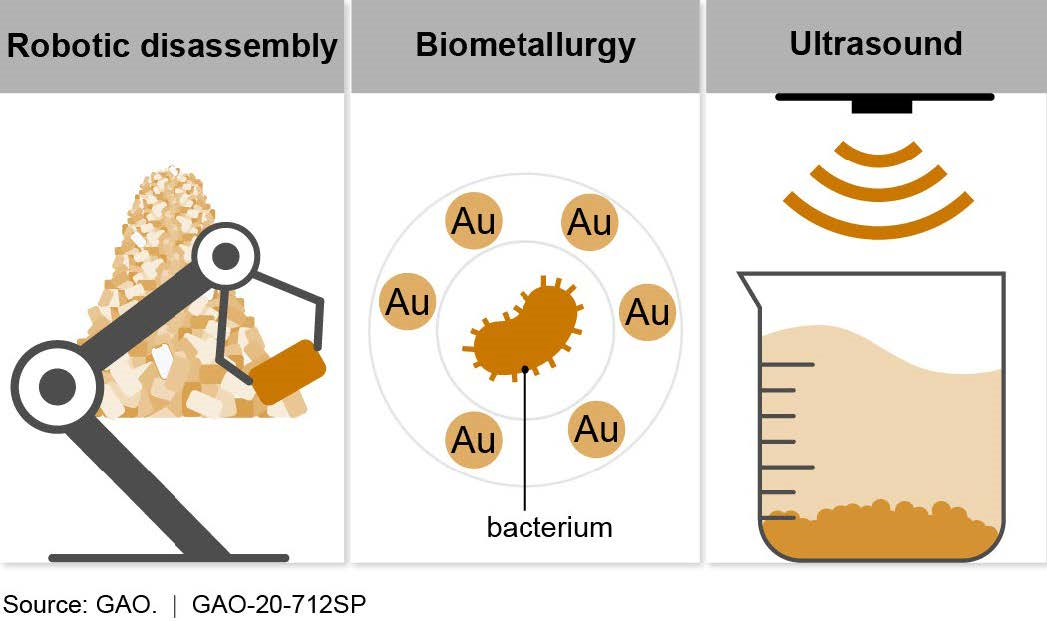 Other advanced techniques, such as magnetic or electrochemical separation, are showing promise in the laboratory with existing technology. For example, in one study, researchers used ultrasound to dissolve nickel and gold within a SIM card. They then used a magnetic field to separate the dissolved nickel, which is magnetic, from the gold, which is not. Similarly, other techniques use electric fields to separate dissolved metals based on their weight and electric charge.

How mature is it? Recycling technology is well established for some traditional single-stream processes, such as aluminum recycling. However, electronic devices are more complex and require disassembly and separation. At least one consumer electronics manufacturer is piloting robotic disassembly for its products. Emerging separation technologies such as ultrasound have come to market in the past decade and are being used. Manual disassembly and shredding are decades old. Biometallurgy is being tested in pilot plants, and new microorganisms are being developed in laboratories to treat electronic waste.

With the volume of electronic waste expected to grow, questions include: