E-cigarettes are battery-powered devices that generate an inhalable aerosol that usually contains nicotine. They are designed as alternatives to traditional cigarettes.

E-cigarettes are relatively new, and their long-term effects are not yet known. Although they may potentially be less harmful substitutes for traditional cigarettes, risks of addiction, injury, and death from e-cigarettes are becoming more apparent.

Examples of types of e-cigarettes

With millions of teens and young adults using e-cigarettes, a new generation could become addicted to nicotine and face other health risks. For some adult smokers, e-cigarettes may offer a less harmful substitute for traditional cigarettes. However, long-term effects on users, second-hand exposure, and environmental effects are not yet fully known.

What is it? Electronic cigarettes—or e-cigarettes—are battery-powered devices that convert a liquid, usually with nicotine, into an inhalable aerosol. They are designed as an alternative to smoking traditional cigarettes. First introduced in the United States about 15 years ago, e-cigarettes have evolved from disposable, single-use products to more sophisticated devices that can be refilled and customized (fig. 1).

Figure 1. E-cigarettes can vary widely in design and appearance.

How does it work? Although e-cigarettes vary in design and appearance, they generally work the same way. An e-cigarette has four components: battery, cartridge or tank that holds a liquid, heating element or atomizer, and mouthpiece. Studies have identified a wide variety of chemicals in the cartridges, liquids, and aerosols, including between 60 and 113 ingredients in different liquid brands. According to CDC, the aerosol from the liquid generally contains fewer harmful chemicals than smoke from traditional cigarettes. However, risks of injury and death from e-cigarettes are becoming more apparent, and the toxicity of some ingredients in inhaled form is largely unknown.

The liquid typically contains water and other solvents, nicotine, flavoring, and other substances. The liquid can also contain tetrahydrocannabinol (THC), the main psychoactive chemical in marijuana. The aerosol can contain metals, volatile organic compounds, and formaldehyde, which is a known carcinogen.

The device heats the liquid, creating an aerosol. Inhalation, commonly called vaping, deposits particles in the user’s lungs (fig. 2). Substances in the particles, including nicotine, pass into the blood. Nicotine flows rapidly into the brain, resulting in the release of dopamine, which is associated with pleasure and appetite suppression. Nicotine can cause addiction. E-cigarettes mimic the sensory experiences of smoking a traditional cigarette, such as inhaling, exhaling, and the hand-to-mouth motion. These have been found to contribute to addiction by creating additional pleasurable sensations through the taste, sight, and smell. 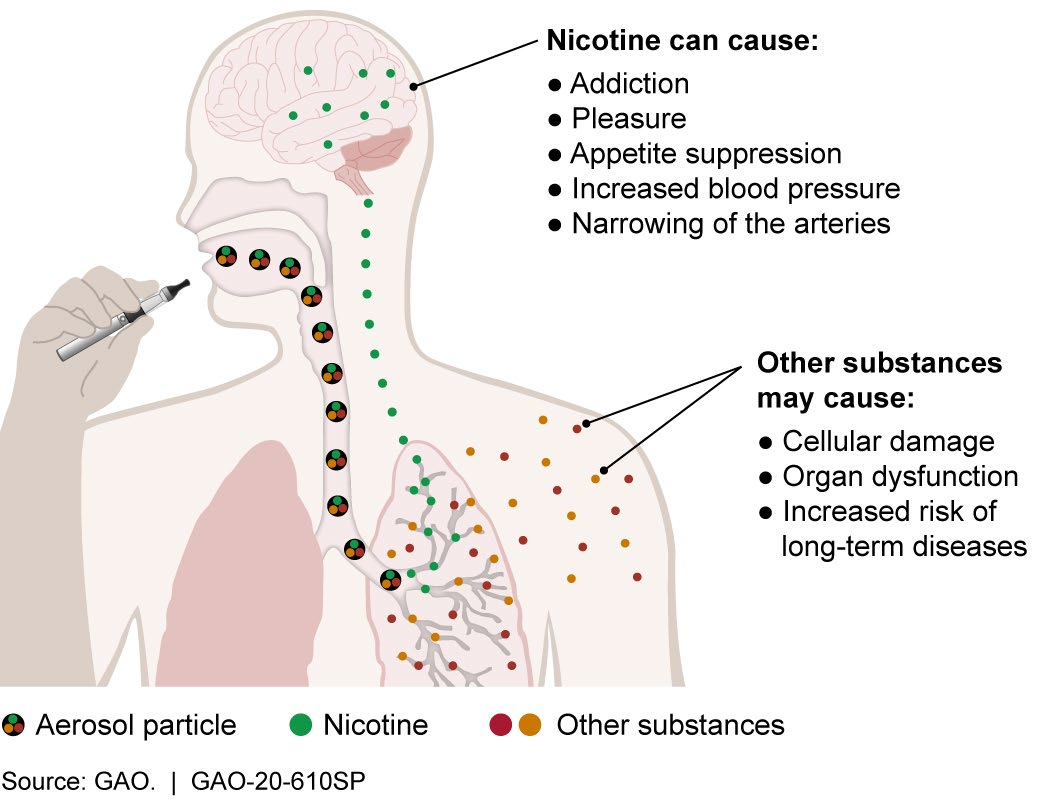 Nicotine exposure during adolescence can affect learning, memory, and attention. It can also increase risk for future addiction to nicotine and other drugs. However, many young users report they began using e-cigarettes because of the flavors and, according to CDC, do not realize they are inhaling nicotine.

How mature is it? E-cigarettes are relatively new. Therefore, direct and indirect health effects are not yet fully known, including long-term effects on users (e.g., increase or reduction in smoking), second-hand exposure to exhaled aerosol and accidental ingestion of the liquid, and environmental effects (e.g., lack of recycling and waste streams for used devices).

In addition to the risk of nicotine addiction, e-cigarette use is associated with serious lung injury. As of February 2020, e-cigarette lung injury resulted in over 2,700 hospitalizations, mostly among young adults, and 68 deaths in the United States. Public health agencies found these cases are strongly linked to vitamin E acetate, an additive in some THC-containing e-cigarettes, but have not ruled out the possible contribution of other chemicals.

The Food and Drug Administration (FDA) extended its regulatory authority over tobacco products to include e-cigarettes in May 2016. In December 2019, Congress raised the minimum age to buy tobacco products, including e-cigarettes, from 18 to 21. Because of the popularity of certain flavored e-cigarette products among children, FDA stated in January 2020 that it would prioritize enforcement actions against the manufacture and sale of most flavors in cartridge-based e-cigarettes. In April 2020, FDA extended from May to September 2020 the deadline for manufacturers to apply for premarket authorization, a process that includes the scientific evaluation of risks and benefits of e-cigarettes for the U.S. population.