Hypersonic weapons are expected to:

Be able to change targets during flight

Be extremely difficult to defend against

Key technologies for these weapons remain under development. Policy considerations include whether the goals for hypersonic weapons are realistic, as well as the implications of their proliferation.

An artist’s rendering of the experimental X-51A Waverider, which used a “scramjet” to reach hypersonic speeds.

Illustration of an experimental jet flying through a dark sky

What is it? Hypersonic weapons fly at least Mach 5 – five times the speed of sound, or approximately 3,800 mph. Unlike ballistic missiles, which can reach similar speeds but have a relatively fixed flight path, hypersonic weapons, once developed, would fly at lower altitudes, be highly maneuverable, and may be able to change targets during flight. This will make them extremely difficult to defend against.

How does it work? Most hypersonic weapons fall into two categories, hypersonic glide vehicles (HGVs) and hypersonic cruise missiles (HCMs). 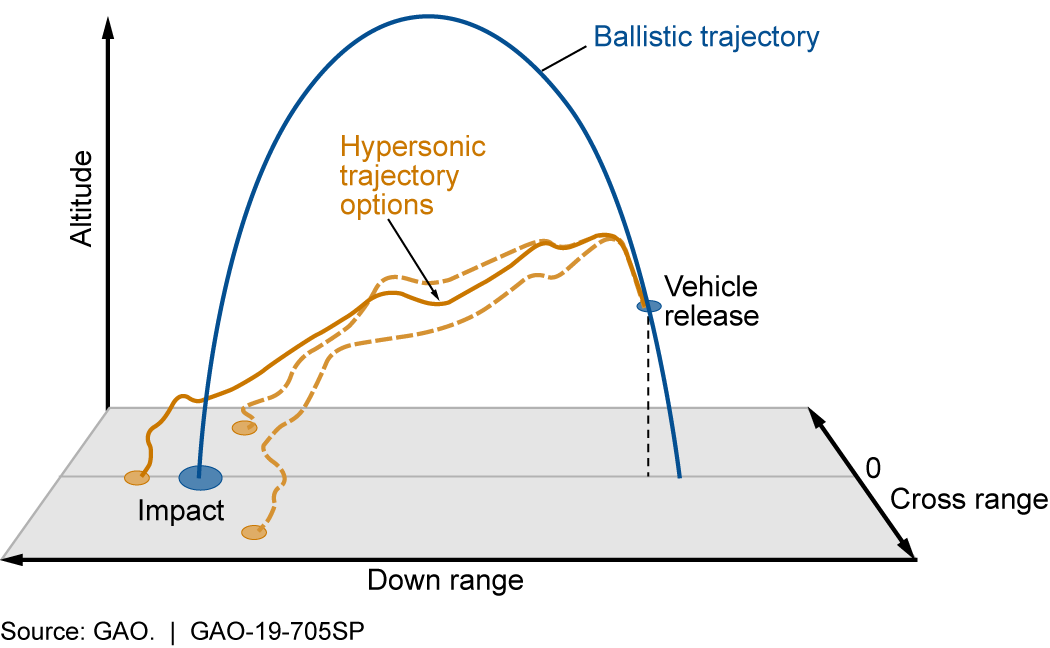 Figure 1. Ballistic Reentry Vehicle (RV) Versus HGV Trajectories. An RV follows a parabolic trajectory determined mainly by its launch characteristics, its target, and gravity. An HGV can take a variety of trajectories and leave its final destination ambiguous.

HGVs are unpowered and glide to their targets from a high altitude after initial launch by a rocket. They are expected to fly at altitudes between 25 and 60 miles.

HCMs are powered by high-speed engines during their entire flight. They are expected to fly at altitudes between 12 and 19 miles.

For most HCMs, a rocket would accelerate the missile to Mach 3 or 4, and then the HCM’s own ramjet or supersonic combustion ramjet (scramjet) engine would take over. A ramjet uses the speed of the vehicle to “ram” and compress air with fuel, which is burned to produce thrust. A scramjet is similar, with air moving at supersonic speed.

Figure 2. Scramjet Engine. The air enters the inlet at a speed greater than Mach 1. It is then compressed by the engine geometry, and combustion occurs at supersonic speeds.

How mature is it? According to a U.S. Air Force Scientific Advisory Board report, domestically, the core technologies needed for the development of a tactical range HGV have reached Technology Readiness Level (TRL) 5 out of 9. The board expected the remaining subsystems for such a weapon to reach TRL 6 or higher by 2020. According to GAO best practices, TRL 7 is the level of technology maturity that constitutes a low risk for starting system development. It indicates that a technology has achieved form, fit, and function, and has been demonstrated in an operational environment.

Hypersonic weapons, once developed, would fly faster than 3,800 mph and be extremely difficult to defend against. Advances in hypersonic technologies have significant implications for national security, as well as for transportation and space systems. Research and development of offensive and defensive capabilities in hypersonics is and will remain critically important.

Within the Department of Defense (DOD), multiple programs by DARPA, the Air Force, the Navy, and the Army are leading research or developing hypersonic weapons for a variety of applications and launch methods.

NASA also conducts work related to hypersonics for vehicles and space- craft reentry into the atmosphere, both for NASA programs and in support of DOD. This includes research to safely control and guide hypersonic vehicles.

With U.S. investment in hypersonics is increasing, and key technologies not yet mature, some key questions for consideration include: