Millions of Americans are cared for in nursing homes each year, and that number is expected to increase as baby boomers age.

So how do you choose a nursing home?

Nursing Home Compare is an online tool that allows people to research and compare nursing homes using a rating system. We found that most people think the site is helpful, but it's not perfect. For example, it lacks some key information, such as consumer satisfaction scores.

The Centers for Medicare & Medicaid Services runs the site, and we recommended four ways CMS can improve it and make it a better tool for consumers, including adding consumer satisfaction scores. 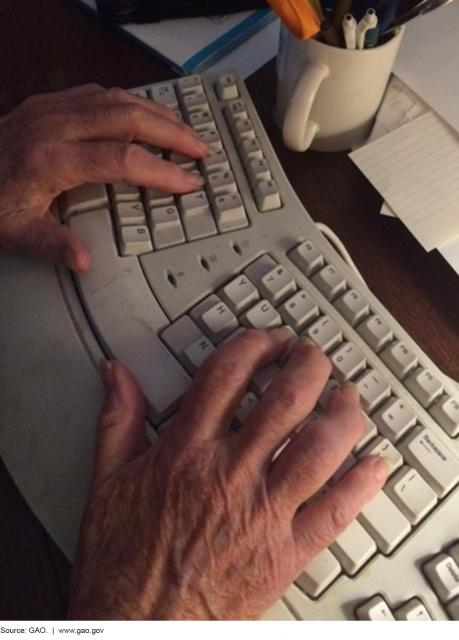 Photograph of an elderly person’s hands on a computer keyboard.

GAO found that the Centers for Medicare & Medicaid Services (CMS) collects information on the use of the Nursing Home Compare website, which was developed with the goal of assisting consumers in finding and comparing nursing home quality information. CMS uses three standard mechanisms for collecting website information—website analytics, website user surveys, and website usability tests. These mechanisms have helped identify potential improvements to the website, such as adding information explaining how to use the website. However, GAO found that CMS does not have a systematic process for prioritizing and implementing these potential improvements. Rather, CMS officials described a fragmented approach to reviewing and implementing recommended website changes. Federal internal control standards require management to evaluate appropriate actions for improvement. Without having an established process to evaluate and prioritize implementation of improvements, CMS cannot ensure that it is fully meeting its goals for the website.

GAO also found that several factors inhibit the ability of CMS's Five-Star Quality Rating System (Five-Star System) to help consumers understand nursing home quality and choose between high- and low- performing homes, which is CMS's primary goal for the system. For example, the ratings were not designed to compare nursing homes nationally, limiting the ability of the rating system to help consumers who live near state borders or have multistate options. In addition, the Five-Star System does not include consumer satisfaction survey information, leaving consumers to make nursing home decisions without this important information. As a result, CMS cannot ensure that the Five-Star System fully meets its primary goal.

Approximately 15,600 nursing homes participating in the Medicare and Medicaid programs provide care to 1.4 million residents each year. To help consumers make informed choices about nursing homes, CMS developed the Nursing Home Compare website, and on the site made available the Five-Star System, which rates homes on quality components.

GAO was asked to assess the website and rating system as tools for consumers. GAO examined (1) the information CMS collects about the use of Nursing Home Compare, including its usefulness to consumers, and potential areas, if any, to improve the website, and (2) the extent to which the Five-Star System enables consumers to understand nursing home quality and make distinctions between homes. GAO reviewed CMS documents and interviewed CMS officials and national and a non-generalizable sample of state-level stakeholders from four states, selected on factors such as size. GAO also analyzed Five-Star System and consumer complaint data, and analyzed resident satisfaction data from two of the four selected states.

GAO is making four recommendations, including, that CMS establish a process to evaluate and prioritize website improvements, add information to the Five-Star System that allows homes to be compared nationally, and evaluate the feasibility of adding consumer satisfaction data. HHS agreed with three of GAO's recommendations, but did not agree to add national comparison information. GAO maintains this is important information, as discussed in the report.