In 2014, the President announced a shift in U.S. policy toward Cuba—restoring diplomatic relations, modifying the long-standing economic embargo, and increasing support for the Cuban people, including the nascent private sector.

Along with the import of cigars and rum, new U.S. regulations have fostered some travel and commerce with Cuba—but the embargo and Cuban government barriers still limit economic engagement.

Federal agencies have begun to engage with U.S. businesses and Cuban entrepreneurs, but with uncertain results.

We recommended agencies start collecting information necessary to monitor the economic impacts of the policy change. 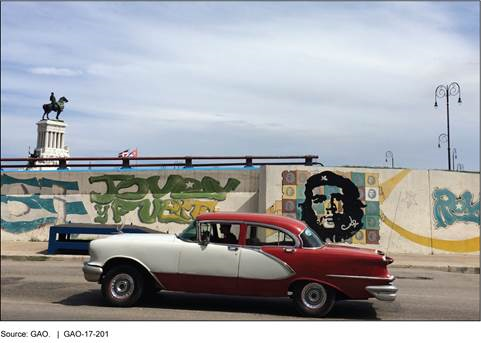 Photo of a 1950s style car on a road. Graffiti and monument in the background.

U.S. regulatory changes have created some new opportunities in Cuba, but economic engagement is still limited. The U.S. government has made six sets of regulatory changes since December 2014 to ease restrictions on travel, remittances, financial services, and trade with Cuba. For example, the Department of Commerce created a new export license exemption to facilitate U.S. exports that support the Cuban people, including the private sector. The regulatory changes have generated U.S. business interest; however, relatively few commercial deals have been completed. In addition, U.S. trade with Cuba has decreased, driven by declining agricultural exports, which have been legal since 2000. Changes in remittance and travel regulations are expected to benefit the Cuban private sector through increased capital and purchases from U.S. visitors. Although the regulatory changes have created some new opportunities for U.S. businesses and the Cuban private sector, embargo restrictions and Cuban government barriers continue to limit U.S.-Cuba economic engagement.

U.S. agencies have conducted a range of activities to support U.S. policy changes; however, embargo restrictions, resource constraints, and Cuban government priorities affect their ability to support U.S. businesses or engage the Cuban private sector. Within these limitations, the Department of State (State) and other U.S. agencies have engaged with the Cuban government, U.S. businesses, and the Cuban private sector. Among other things, they have established memoranda of understanding with the Cuban government, hosted events with Cuban entrepreneurs, and promoted training opportunities. However, U.S. agencies have not collected and documented key information on the Cuban economy, the effects of regulatory changes, and agency activities, in accordance with federal standards for internal control. Without collecting and documenting information, agencies risk being unable to monitor and assess changes over time in economic engagement with Cuba, including with the private sector.

In the more than 50 years since it established an embargo on Cuba, the U.S. government has pursued a policy designed to isolate Cuba's communist regime. In December 2014, the President announced a significant change in U.S. policy. Since then, the U.S. government has restored diplomatic relations with Cuba and modified some aspects of the U.S. embargo. The Cuban government has also implemented economic reforms in recent years to allow for certain private sector activity. While much of Cuba's economy is still state-controlled and the U.S. embargo on Cuba remains in place, developments in recent years have created new opportunities for U.S. economic engagement with Cuba.

GAO recommends that State, in consultation with key agencies, take steps to identify and collect information to monitor changes in economic engagement resulting from the shift in U.S. policy. State concurred with the recommendation.