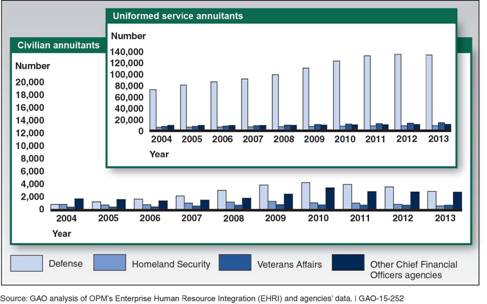 OPM officials said that they do not conduct trend analysis of dual compensation waiver requests and they provide related guidance only as needed. While OPM is not required to conduct trend analysis, given the increasing number of retirement-eligible federal employees, without such analysis OPM may be missing opportunities to analyze information that can inform decisions about the human capital management tools it develops and provides for agencies government-wide. OPM's ability to conduct trend analysis is limited by its lack of a systematic and reliable process for maintaining dual compensation waiver documentation. The lack of policies and procedures is inconsistent with federal internal control standards and made OPM unable to timely retrieve the documentation for GAO's review.

OPM is not required by statute to monitor agencies' implementation of individual dual compensation waivers to determine whether relevant requirements are followed. OPM regulations provide for limited oversight in delegated situations, where waiver authority is delegated to agencies without a time limit. GAO recommends that OPM analyze trends in agencies' use of dual compensation waivers and establish policies and procedures for maintaining waiver documentation. OPM did not concur with the first and partially concurred with the second recommendation. GAO maintains that OPM should implement these actions as discussed in the report.

The federal workforce has a large number of retirement-eligible employees that could potentially result in a loss of skills hindering federal agencies' ability to meet their missions. Agencies can mitigate this challenge by hiring uniformed and civil service retirees. Generally, when an agency reemploys a retired civil service employee, their salary rate is subject to offset by the amount of the annuity received. Upon request, OPM has authority to waive offsets, allowing dual compensation (annuity and full salary). Dual compensation is also permitted under other authorities not administered by OPM, such as the authority provided to Defense.

GAO was asked to provide information on the use of rehired annuitants and OPM's dual compensation waiver authority. This report: (1) describes the trends in rehired annuitants for fiscal years 2004 to 2013; (2) identifies the extent to which OPM analyzes trends in the reasons for waiver requests, and provides guidance to agencies, and (3) evaluates the extent to which OPM ensures agencies' compliance with the conditions under which the waivers were granted. GAO analyzed OPM data, reviewed OPM documentation, and interviewed OPM officials.

Explore our Key Issues on Employment