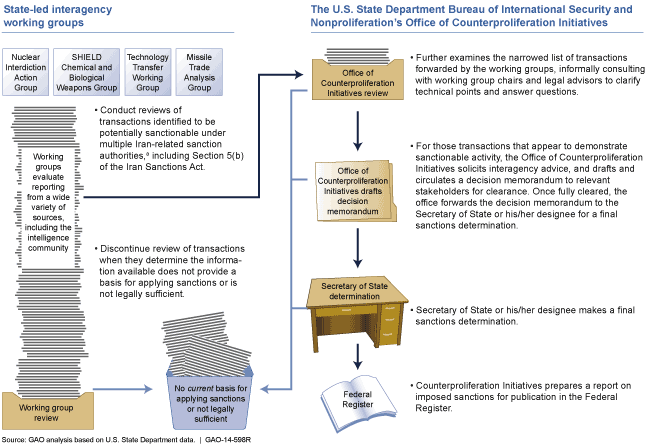 State's Bureau of International Security and Nonproliferation's Office of Counterproliferation Initiatives leads a process to evaluate whether a person's activities are potentially sanctionable under Section 5(b) of the Iran Sanctions Act or under one or more of other multiple Iran-related sanctions authorities. The process begins with four State-led interagency working groups. Each working group is chaired by a State official and consists of representatives from several U.S. government departments and agencies such as the Departments of Defense, Commerce, Homeland Security, Treasury, and Energy; the Federal Bureau of Investigation; and various intelligence community agencies.

Officials from the Office of Counterproliferation Initiatives stated that the working groups are responsible for regularly evaluating reports to identify transactions that are potentially sanctionable under one or more of the multiple Iran-related nonproliferation sanction authorities, including Section 5(b) of the Iran Sanctions Act. According to State and other working group officials, the interagency review process relies on criteria as defined in Section 5(b) when assessing a transaction for the potential application of those sanctions. State is in the process of drafting a document to officially outline its Section 5(b) review procedures and the guidance it provides to the participating working group agencies. State officials also said the groups may stop reviewing transactions if they determine available information does not provide a basis for applying sanctions or is not legally sufficient.

According to State officials, the interagency working groups have not identified any cases that meet the legal requirements necessary to impose sanctions under Section 5(b) as of May 19, 2014. GAO's review of the Federal Register confirmed that State has not imposed any such sanctions as of May 20, 2014.

Iran's efforts to develop its nuclear program threaten regional and global security and present significant challenges to the United States. The United States and other nations have imposed sanctions on Iran that have adversely affected the Iranian economy. U.S. sanctions on Iran include those specified in the Iran Sanctions Act of 1996 (Iran Sanctions Act). Section 5(b) of the Iran Sanctions Act authorizes sanctions on persons engaging in various activities involving weapons of mass destruction or other military capabilities and related to Iran. GAO was asked to review how the Department of State (State) has implemented the sanctions provisions in Section 5(b). This report describes the process State and other relevant U.S. agencies use to determine whether to sanction persons under Section 5(b).

GAO obtained documentation and interviewed State officials. GAO interviewed agency officials at the Department of Energy and the Department of Commerce (agencies identified by State as relevant to the sanctions determination process), and obtained corroborating documentation about their roles in making this determination. In addition, GAO compared the agencies' criteria with the relevant requirements in Section 5(b). GAO obtained documentation from State officials about the number of sanctions imposed under Section 5(b) and interviewed them to seek additional context relating to the sanctions process. GAO also reviewed the Federal Register for notifications of Section 5(b) sanctions for the time period August 10, 2012, to May 20, 2014.