Federal whistleblowers—current, former, and prospective federal employees who allege wrongdoing—play a key role in saving taxpayer money and reducing fraud, waste, and abuse in the federal government. The Office of Special Counsel (OSC) is an independent body that reviews whistleblowers’ claims to see if they warrant a full investigation by the agency in question.

Office of the Special Counsel

After 5 years of increases, OSC received over 1,700 allegations of wrongdoing in 2016—such as federal agencies not providing adequate training, not following procedures, or improperly spending funds. 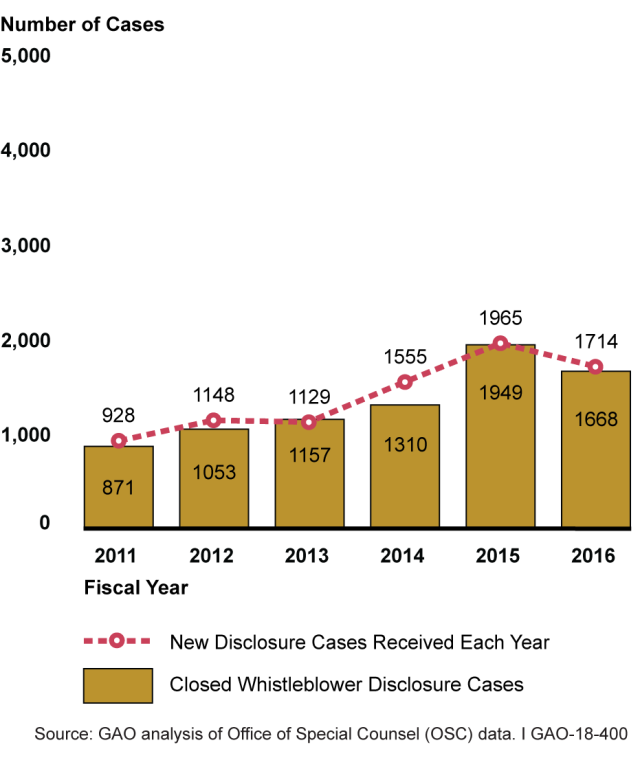 Having received an allegation from a whistleblower, OSC has to determine whether the allegation merits further investigation. OSC can decide quickly if:

OSC takes about a month to close these types of allegations, which make up about 80 percent of OSC’s whistleblower cases. But if OSC finds that the allegation has merit, this process could take a lot longer to resolve. Federal agencies have to investigate the allegations made against them and respond to OSC on both the result of their investigations and any actions they take to correct the allegations. We found that when OSC sends allegations to a federal agency, it can take almost 2 years to resolve the case. 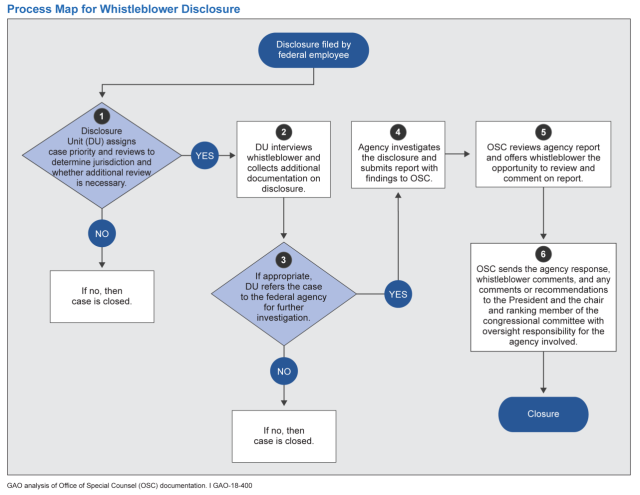 We reported that whistleblowers may have changed positions, left the agency, or given up on a remedy by the time the allegation is resolved. Whistleblowers may also be subject to retaliatory work environments during this long wait period.

In response to our report, OSC began informing whistleblowers that agency investigations may take longer than 60 days, the amount of time agencies are initially given to respond to allegations. However, we found that OSC could improve its process for reviewing whistleblower allegations. For example, OSC grants almost all federal agency requests for additional time to complete investigations. We recommended that OSC review and revise its policy for allowing these extensions.

Want to know more? Check out the full report. You can also report allegations of federal wrongdoing to our FraudNet.

Whistleblowers help protect the government from waste, fraud, and abuse by reporting potential...
Read the post

This week marks Public Service Recognition Week. During this annual event, we usually feature some...
Read the post

Since 2011, whistleblowers have helped the IRS collect almost $2 billion in taxes that may have...