Skip to main content
The stealthy F-35 aircraft, also known as the Joint Strike Fighter, is slated to replace several different types of aircraft in the U.S. fleet. Three variations of the plane—one that can take off vertically, one suited to aircraft carriers, and one designed for regular runways—are heading to the Marine Corps, Navy, and Air Force, respectively. Plans call for the U.S. to buy 2,456 of them. It is a gargantuan investment and the nation’s most costly weapon system. For sustainment alone—repairs, maintenance, etc.—the cost estimate tops $1 trillion to keep the aircraft flying through its projected 60-year lifespan. With F-35 aircraft development nearing completion and the Department of Defense preparing to ramp up production, DOD’s ability to sustain the F-35 is of critical concern. Doing so requires a capable supply chain. Today’s WatchBlog explores our report on DOD’s efforts to sustain the growing F-35 fleet. Sustainment Efforts Already Falling Short and Grounding Aircraft DOD and its international partners have more than 250 F-35 aircraft in their possession and plan to triple the fleet in the next 4 years. But DOD is already facing sustainment challenges that are degrading the fleet’s readiness for action, including: As this graphic shows, average repair times have not matched program objectives.

These challenges are largely due to insufficient planning and funding by DOD. DOD is taking steps to address these challenges, but without improved planning, it may not be able to sustain the rapidly expanding fleet. Estimated Costs Have Increased Although DOD has taken actions to reduce estimated sustainment costs, they have still gone up. The estimated sustainment costs for the life of the F-35 have increased by 24% since 2012, partially due to an increase in projected flying hours and an increase in the aircraft’s lifespan from 56 to 60 years. 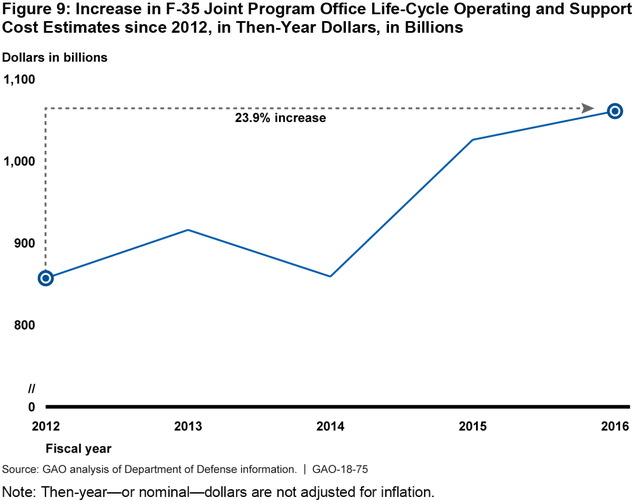 Lack of Communication Muddles the Services’ Understanding of Sustainment Costs A prerequisite for getting a grip on sustainment cost increases is understanding the sustainment costs, and visibility is limited in this area. The F-35 program office is responsible for getting the aircraft built and ensuring that it will meet the needs of the services in terms of capabilities and sustainment. It approves sustainment requirements submitted by the services, hires contractors, and informs the services of the contract costs. However, the office and the services are not communicating as well as they should be. As a result, the military services do not fully understand what they are paying for. They report unexplained cost increases and difficulty matching their sustainment requirements to the actual contracts. Without improving communication about the costs the services are being charged, the services may struggle to effectively budget for F-35 sustainment. We recommended that DOD take steps to improve communication with the services and provide more information about how the F-35 sustainment costs they are being charged relate to the capabilities received. DOD Risks Entering Into F-35 Performance-Based Contracts Too Early DOD is testing out performance-based sustainment contracts with the prime contractor for the F-35 and plans to switch entirely to this kind of contract in 2020. DOD administration has directed greater use of performance-based logistics agreements as a way to decrease costs and increase contractor performance. However, DOD could find itself overpaying the contractor while not receiving the expected level of support for the F-35. A performance-based agreement with the prime contractor has potential to produce cost savings, but we highlighted several reasons why DOD may not be ready to enter into these multi-year contracts for the F-35 by 2020. We recommended that DOD re-examine its metrics and ensure that it has sufficient knowledge of costs and technical characteristics before entering into performance-based contracts. Check out our report to learn more about F-35 sustainment and all 4 recommendations we made to DOD.
Read the post