Skip to main content
The Digital Accountability and Transparency Act of 2014 requires federal agencies to prepare and submit standardized, accurate information about the roughly $3.7 trillion they spend each year. The Office of Management and Budget and the Department of the Treasury are required to help facilitate such reporting, and make it available to the public. We’ve reported on the challenges—and successes—related to these efforts over the past several years. The DATA Act required agencies to begin submitting spending data to OMB and Treasury in May 2017. We just completed our first review of the timeliness, completeness, accuracy, and quality of these data. Today’s WatchBlog shares some of what we found. Data quality concerns 78 federal agencies submitted spending data back in May. However, we found issues with completeness and accuracy of these data. For example, information related to 160 financial assistance programs—with estimated annual spending of $80.8 billion—was omitted from the data. We also found the accuracy of the data—the consistency between reported data and authoritative agency sources—differed sharply between budgetary and award data. While budget data (e.g. appropriations) was largely consistent with agency records, award data (e.g. grants, contracts, and loans) was largely inconsistent. In addition, we found differences in how agencies interpreted and applied OMB’s definitions for certain required data elements. For example, the Departments of Labor and Health and Human Services used different definitions of “Primary Place of Performance”—essentially where the federal funds were spent—when reporting on similar contracts with the same company. 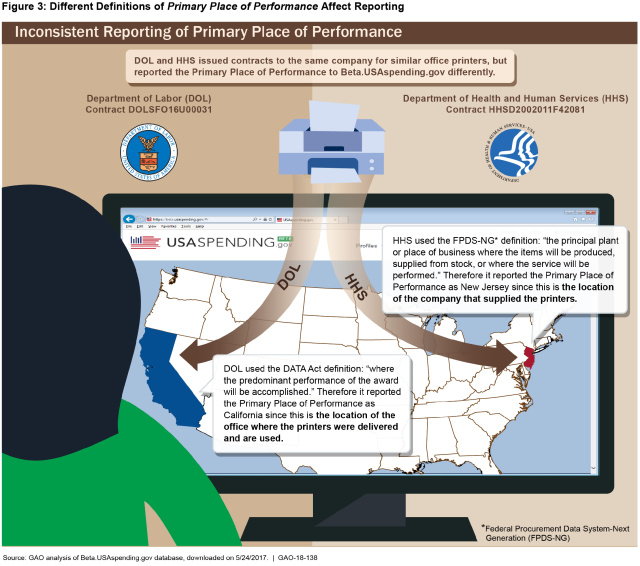 And while some agencies were clear and concise in how they described awards issued, others used shorthand descriptions, acronyms, or terminology that would be difficult for the general public to understand. 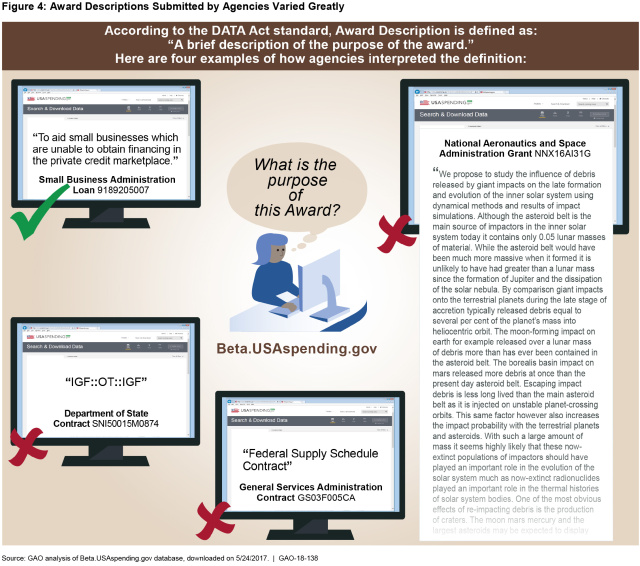 This lack of accuracy and consistency in how agencies report their spending data may make it difficult for Congress and the public to understand what’s being reported, and limits the ability to meaningfully aggregate or compare spending data across the federal government. Presentation problems We also noted limitations with how agency spending data is presented on Treasury’s website—currently still in development, but open to the public. Among other things, we identified inconsistencies with the site’s search function that could leave users with an incomplete or inaccurate picture about federal spending. For example, on October 25, 2017, a person interested in knowing how much federal money was spent in New York City was presented with the option to select four different New York Cities—each of which returned very different information. And although still in development, the site could also better disclose known data quality limitations. Such disclosure will become essential when the site becomes the only available source of this data; scheduled for some time in the fall of this year. Among other things, we recommended that OMB clarify its guidance to help ensure agencies submit more consistent data, and that Treasury better disclose known data quality issues on its website. OMB and Treasury generally agreed with our recommendations. For more information about our review, check out our full report.
Read the post