It’s almost that time of year when tens of thousands of medical students gear up to apply for residency programs. These residency programs, also known as graduate medical education (think early seasons of Grey’s Anatomy), are the pipelines for our primary and specialty care doctors. Where medical residents choose to work—and how they choose to specialize—has a significant impact on the public’s access to healthcare.

There is particular concern that there are too few doctors in some rural parts of the country and health care access may be harder to come by in those areas.  Back in 2015, we reported on the health care workforce and found that federal programs did not target areas in which federal agencies had identified shortages, such as doctors in rural areas and potential shortages of primary care doctors.

In today’s WatchBlog, we’re taking a look at those issues and how trends in graduate medical education have changed.

In our latest report, issued in June 2017, we found that despite federal efforts to meet rural needs—largely payment incentives for residency programs in such areas—aspiring doctors continue to cluster in urban areas, although there has been some growth in rural areas. And where medical students cluster is important because research shows they are likely to stay and practice medicine in the area where they studied. 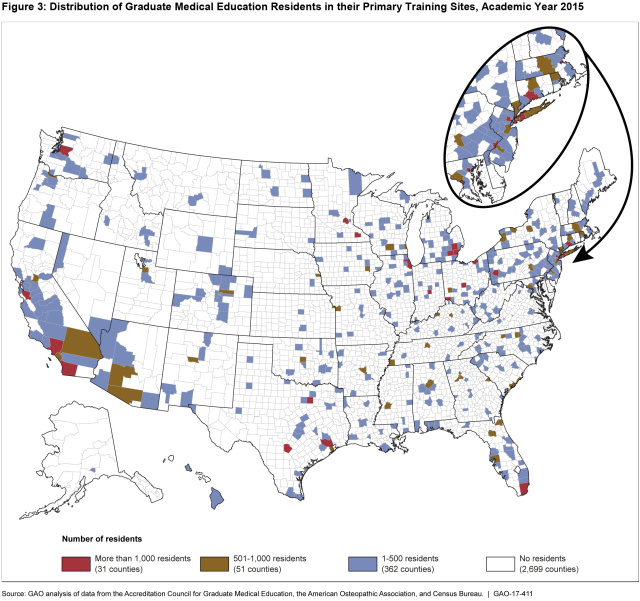 In our latest report, we also found that the types of doctors in residency programs did not change too much from 2005 through 2015. Although the federal government has made efforts to meet the future demands for primary care doctors—such as through grants for training programs—HHS’s Health Resources and Services Administration projects that the primary care shortages will likely continue.

This may be partially due to how medical residents are choosing to specialize and subspecialize. Aspiring doctors pick a specialty (e.g., internal medicine, pediatrics, radiology) after medical school and must complete 3-5 additional years of specialty training. Medical residents who specialize in family medicine, internal medicine, or pediatrics are considered primary care residents. Some doctors may choose to enroll in additional training programs to subspecialize (for example, pediatric anesthesiology). 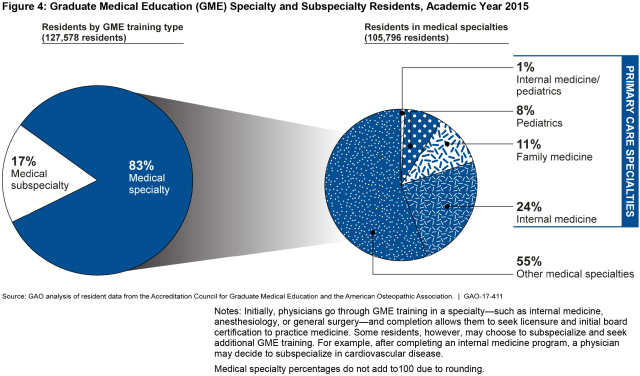 But past researchers have estimated that about 55 percent of internal medicine residents and 39 percent of pediatric residents will subspecialize—so they most likely won’t end up practicing primary care. According to HRSA, the country needs about 8,500 more primary care doctors, and will face a shortage of over 20,000 of such doctors by 2025.

To find out more about federal efforts to increase the nation’s supply of doctors who practice in rural areas and in primary care, check out our full report—including our prior recommendation to the HHS to develop a comprehensive workforce plan to address these gaps.