Skip to main content
To defend the nation’s strategic interests across the globe, in 2016 the Navy announced a goal of expanding its fleet to 355 ships—a significant increase over its previous goal of 308 ships. In recent years, however, the Navy has struggled to maintain its existing fleet of 276 ships and submarines—in part because of a $4.8 billion backlog in facilities restoration and modernization projects at the naval shipyards. (This cost is separate from the cost to restore and maintain current ships.) To see the conditions at some of the shipyards and hear more details, check out our recent video: In our recent testimony and report, we discussed the need to address persistent maintenance, training, and other readiness challenges facing the fleet. Today’s WatchBlog discusses specifically how well the naval shipyards are supporting Navy readiness. The Naval Shipyards The 4 naval shipyards—Norfolk, Pearl Harbor, Portsmouth, and Puget Sound—play a critical role in keeping the fleet in working order. With a combined workforce of over 36,000 employees and an annual budget of over $5.1 billion, the shipyards provide maintenance, modernization, and emergency repairs primarily to the Navy’s nuclear-powered aircraft carriers and submarines. 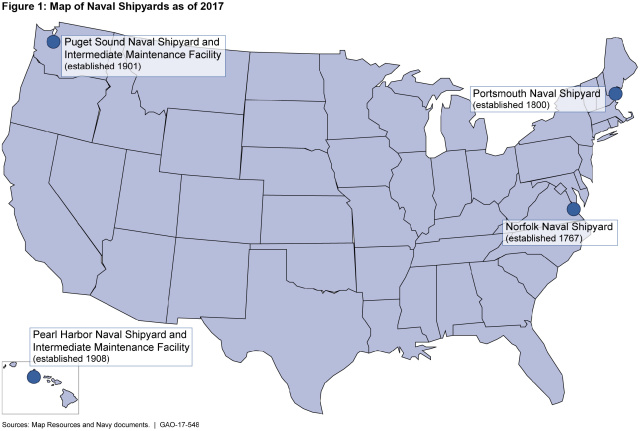 However, the shipyards were largely designed to build and maintain World War II-era ships, and are not optimally configured to maintain and repair today’s modern Navy. Naval Shipyard Performance The naval shipyards have struggled to consistently complete maintenance on time. From 2000 to 2016, the shipyards finished less than a half of their aircraft carrier and less than a quarter of their submarine repairs on time—reducing the days these vessels were available to the fleet. For example, we found that shipyard delays in 2015 equated to losing an entire aircraft carrier for more than a year.

Shipyard Facilities and Equipment Challenges Shipyard official told us the causes of these maintenance delays are partly a result of inadequate facilities and equipment, including: The Navy estimates it will require about $9 billion dollars to address its shipyard facility and equipment needs, or it may not be able to complete a third of its scheduled aircraft carrier and submarine repairs over the next 2 decades. Increasing the size of the fleet to 355 ships will likely only increase the strain on the shipyards. 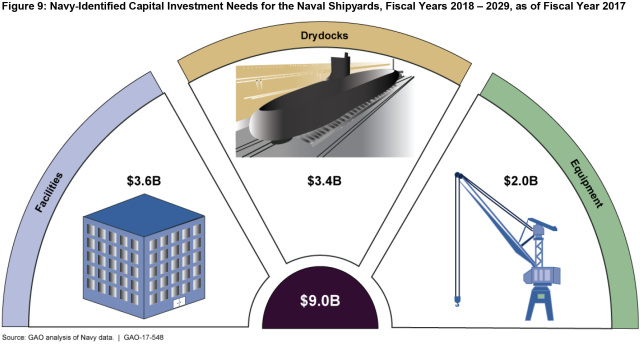