Skip to main content
On this date in 1933, President Franklin D. Roosevelt signed the law that brought the Tennessee Valley Authority into existence. It is now the country’s largest public power provider, delivering electricity to more than 9 million people. The electric utility industry requires huge upfront investments to ensure that utilities can meet future energy needs. The 84-year-old TVA, however, is already billions of dollars in debt—and needs to fund its pensions on top of that. Today’s WatchBlog explores TVA’s debts and what it needs to do to prepare for the energy demands of the future. Getting squeezed When TVA’s customers pay their bills, the money goes toward running, administering, and maintaining TVA’s current operations. In contrast, TVA primarily finances large capital investments (such as constructing new power plants) by issuing bonds. By law, TVA has a $30-billion limit on bonds and other types of debt. As of September 2016, TVA’s debt totaled about $26 billion—about $24 billion of which TVA counts toward the limit. These debts, coupled with the requirement to keep rates as low as feasible, makes large capital investments challenging. To ensure that it can make future investments, TVA plans to reduce its debt by $4 billion (by fiscal year 2023) by: A growing concern As we’ve reported, TVA has a long history of debt. For example, in the late 1960s and 1970s, TVA started construction on 17 nuclear units but completed only 7 because of lower-than-anticipated demand for electricity. This resulted in billions of dollars of debt that put future plans in jeopardy. Since the late 1970s, TVA’s financial condition has only worsened due to delays, cost overruns, and operational shutdowns in its nuclear program.

TVA’s pension liabilities add to these financial woes. Its pension plan was only about 54 percent funded as of September 30, 2016. Although TVA hasn’t increased its debt much over the past decade, the plan’s unfunded pension liabilities have steadily increased. Moreover, the agency continues to invest in nuclear projects while deferring full recognition and funding of pension liabilities, which means TVA may need to raise rates in the future to fund those liabilities. 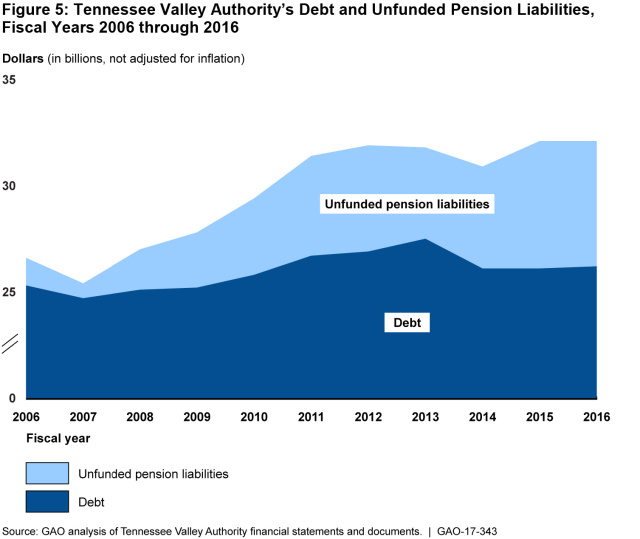 TVA’s debt reduction plans can also be derailed by other unforeseeable events, such as regulatory pressures, future changes in demand for electricity, and technological innovations. Illuminating information According to TVA, managing its debt and unfunded pension liabilities are major management challenges. TVA is required to report performance information on those challenges, but hasn’t done so—which reduces transparency and raises questions about how it will meet its goals. While TVA also aims to eliminate $6 billion in unfunded pension liabilities within 20 years, market conditions and other factors could affect progress toward this goal. No mechanism is in place to ensure the pension plan is fully funded. We recommended that the TVA Board of Directors better document and communicate TVA’s goals in its performance plans and reports, as well as work toward rules that can ensure its pensions are fully funded. To find out more about our recommendations, check out our full report.
Read the post