Skip to main content
In honor of today’s World Water Day, we are taking a look at our work on combined sewer overflows in cities with declining populations—and the serious wastewater problem they pose. Combined sewer systems collect stormwater runoff, domestic sewage, and industrial wastewater into one pipe. During heavy rain or snow storms, the volume of this wastewater can exceed capacity, causing these systems to release excess, untreated wastewater directly into nearby water bodies. This wastewater often has pathogens, bacteria, and other pollutants, which hurts water quality. We recently looked at the capacity of cities with declining populations to address this major source of water pollution, as well as other infrastructure needs. Today’s WatchBlog discusses what we found. Wastewater needs… The EPA estimates that water and wastewater utilities across the United States plan to spend about $655 billion over 20 years to maintain, upgrade, or replace major water infrastructure. For wastewater in particular, 859 cities (primarily in the Northeast and Midwest) have combined sewer systems, and EPA estimates that planned projects to prevent or control combined sewer overflows—such as building holding tanks or tunnels—will cost about $48 billion over the next 20 years. …and challenges However, we found that declining populations are making it challenging for cities to pay for these types of infrastructure improvements. 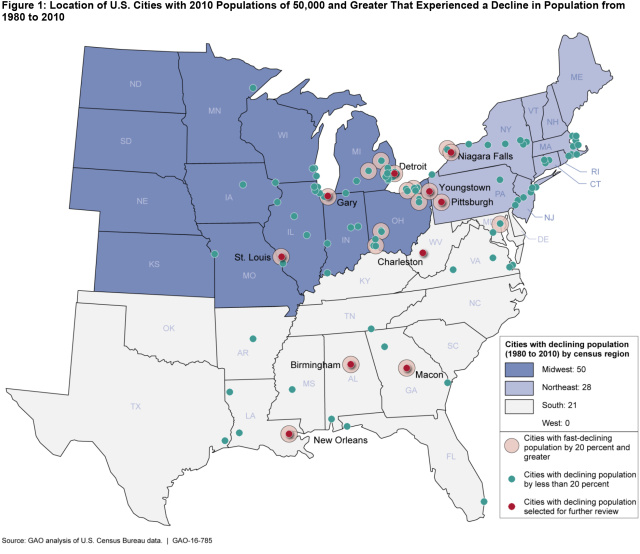 Many midsize and large cities—i.e., those with 50,000 to over 100,000 people—have lost a substantial percentage of their populations. For example, 674 midsize and large cities had a 2010 population greater than 50,000, but 15 percent of them had experienced population declines from 1980 to 2010. Most of these cities are in the Midwest and Northeast. These cities must deal with a decline in utility revenues from a loss of ratepayers, which makes it more difficult to address their water infrastructure needs. Green infrastructure could help According to wastewater utilities we spoke with, green technologies and practices—known as green infrastructure—are a potentially less costly approach to controlling stormwater and reducing the risks of combined sewer overflows. Green infrastructure uses practices such as vegetated areas, stormwater collection, and permeable pavements to enhance storage, infiltration, and reuse of stormwater. For example, some wastewater utilities we looked at are considering using vacant lands for green infrastructure to help control stormwater runoff that can lead to sewer overflows. For more information on wastewater management, check out our latest report.
Read the post