Skip to main content
One of the most contentious issues in the defense budget debates over the last three years has been the fate of the Air Force’s A-10 attack jet—a.k.a “the warthog.” Will (or should) the A-10 survive to fight another day? Today’s WatchBlog looks at the trade-offs involved in divesting from the A-10. Tough questions for the Air Force The A-10 was originally built in the late 1970s to provide close air support—direct support to ground troops—and defeat enemy forces. Today, the A-10 is not the only aircraft that can provide close air support for friendly forces (as shown in the figure).

Given these alternatives, and facing a lower-than-expected budget level, the Air Force argued that retiring the A-10 to prioritize modern aircraft—though not optimal—was the best option. In the Air Force’s view, an earlier-than-planned A-10 retirement was the best way to cut costs, and the least risky.

However, A-10 proponents have argued that it is the most effective and least expensive aircraft for the job. Moreover, the A-10 capabilities stand out in bad weather, when enemy forces are close or moving, and when targets are armored, according to Air Force and other officials familiar with the A-10. In addition, A-10 pilots are considered the Air Force’s close air support experts due to the amount and depth of their training in this mission, which significantly exceeds that of other Air Force pilots. Current uses of the A-10 DOD also uses the A-10 for more than just close air support missions. For example, Air Force analysis indicates that the A-10 is the best Air Force aircraft for countering swarming boats. Further, the A-10 is currently the only DOD aircraft assigned to the “Sandy” role in Combat Search and Rescue (CSAR) missions. When personnel are trapped behind enemy lines, CSAR-Sandy qualified pilots While every combat squadron has a CSAR-Sandy qualified pilot, the Air Force has not determined which, if any, aircraft would take over this mission if the A-10 were to be discontinued. 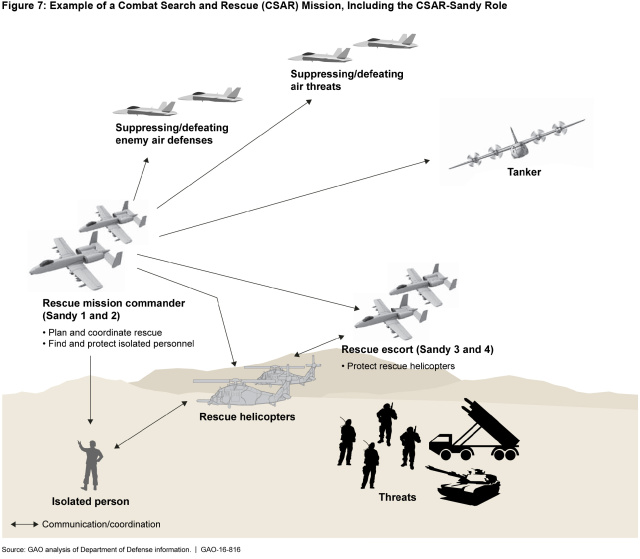 DOD also continues to use A-10s for real-world operations, including operations against ISIS and deployments to the Philippines and the eastern edges of NATO. What happens if the A-10 retires early? Every airplane eventually outlives its usefulness and the A-10 is no different. However, we found that the Air Force made the decision to divest from the A-10 without fully examining the implications—therefore incurring risks and potentially creating capability gaps it did not fully appreciate. We recommended that the Air Force fully identify gaps that would result from A-10 divestment and mitigate any identified gaps before pursuing divestment again. The soon-to-be released DOD budget could reveal how the Air Force plans to move forward on these important issues.
Read the post