Skip to main content
March is Women’s History Month, so we’re taking the opportunity to look at some of our recent work on a range of issues affecting women. Read on for what we’ve found about women in combat, corporate boards, clinical trials, and more. Women in combat Women are gaining increasingly larger roles in the armed forces. For example, more than 300,000 women serving in the U.S. military have deployed to Iraq and Afghanistan since 2001. Additionally, the Department of Defense rescinded bans on women serving in direct ground-combat roles in 2013, and opened all previously closed occupations and positions to women in 2015. However, DOD did not have plans to monitor the military services’ progress in integrating women into the newly opened occupations and positions. We recommended that DOD develop plans to monitor progress in opening these positions to women and the military services’ integration efforts. DOD agreed and implemented this recommendation in March 2016. 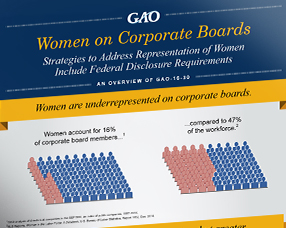 While women have been making strides in the military, getting to the top of the corporate ladder remains a challenge. For example, we found that women continue to hold a lower percentage of corporate board seats than men—but women have been slowly catching up. The percentage of female board directors doubled from 8% to 16% between 1997 and 2014. Still, gender parity on corporate boards could take decades to achieve due to a number of factors, including boards not recruiting diverse candidates and low turnover of board seats. Check out our report for more about the factors affecting women’s representation on corporate boards. Medical research We’ve also examined how National Institutes of Health clinical trials take into account the biological differences between women and men. These differences can result in some drugs or treatments affecting women differently than men—sometimes with dangerous effect. This is why NIH requires its clinical research to include women. However, we found issues with how NIH assessed its efforts to meet these requirements. We recommended that NIH examine more detailed data on women’s enrollment in their health studies, including whether these studies analyze potential differences between women and men. Health awareness 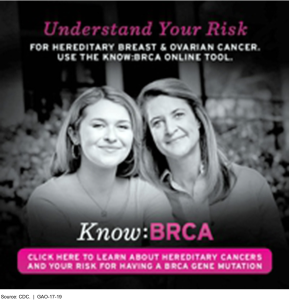 Certain health conditions are more prevalent in women—which has implications for health education and outreach. We recently looked at breast cancer education and found that, while most breast cancer is detected in older women, young women (45 years old and younger) account for 11% of all new cases in the United States. Researchers have found that this group of women tends to be diagnosed with breast cancer at a later stage, experience worse outcomes, and face unique issues in their treatment (such as effects on fertility). Our report highlighted federal efforts to provide breast cancer education and support to young women, including Know: BRCA—an interactive tool that helps women assess their risk of developing cancer. Child care Finally, while child care isn’t just about women, it is of concern to many women. We looked at child care subsidies for low-income families that help families pay for care so that parents can work or attend school or training. We found that more than 14 million children under age 13 nationwide met federal requirements for care in an average month. Yet, only about 1.5 million children received subsidies. When compared with all eligible children, those receiving subsidies tended to be younger (under age 5) and poorer (in families below federal poverty guidelines). You can also see how children meeting federal requirements compares to children eligible for and receiving subsidies in your state: 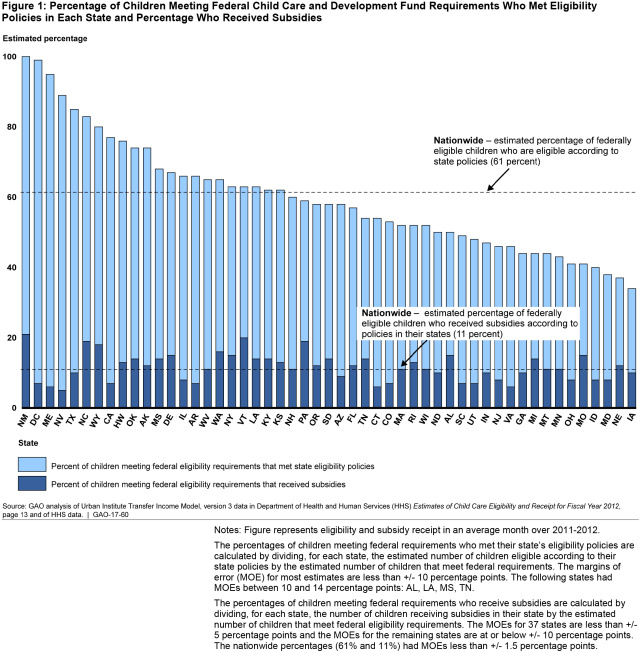 In 2019, a software developer in Chicago submitted bank statements from a fake investor to obtain a...