Skip to main content
Oliver Hart and Bengt Holmström won the 2016 Nobel Prize for Economics for their contributions to contract theory—which looks at how contract incentives help resolve conflicts of interest between parties. And, as anyone who’s hired a contractor knows, ensuring that a job is done right (and that you get a good deal) isn’t always easy. In fact, we see these challenges all the time in our work—the federal government bought about $440 billion of goods and services in recent years—and we urge agencies to follow good contracting principles to save money and get better outcomes. So, in honor of this Saturday’s Nobel Prize award ceremony, today’s WatchBlog explores some challenges we’ve encountered in our work on federal contracts. Is it a good deal? Competition between firms is a cornerstone of the federal government’s approach to contracting, but it isn’t always possible—for example, sometimes only one manufacturer can provide the parts and services for airplanes, vehicles, and other equipment the government already owns. We found that, in these cases, DOD often sought additional information from the contractors (e.g., by asking about the cost of materials or labor) to determine if it was getting a good deal. Unfortunately, contractors were not always willing to share this information, which is a challenge to ensuring that these contracts are fair and reasonable. A bridge too far? When an existing contract is set to expire, and the new contract is not yet ready, agencies can extend the existing contract. And, while these “bridge contracts” can be necessary tools to avoid gaps in service, they are also awarded without competition—which may mean that the government is paying too much for them.

We reviewed these bridge contracts, and found that most agencies couldn’t adequately identify or monitor these contracts. We recommended that the Office of Federal Procurement Policy define bridge contracts and provide guidance on tracking and managing their use. A High Risk Issue 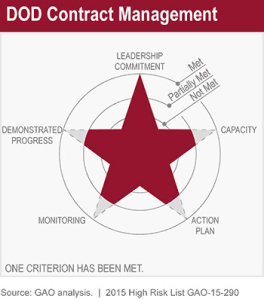 DOD obligates more than $300 billion annually on contracts for goods and services, including major weapon systems, support for military bases, IT, consulting services, and commercial items.  And we and others have identified a range of issues with how DOD manages those contracts, such as with the size and composition of DOD’s acquisition workforce. As a result, DOD contract management is on our High Risk List, which highlights programs at risk for fraud, waste, abuse, and mismanagement, or that need fundamental transformation. We have seen some progress at DOD, such as a sustained leadership commitment to fixing its contracting issues. However, DOD must continue to ensure that it has the people, skills, capacities, tools, and data it needs to make informed acquisition decisions to carry out its mission, especially in an era of more constrained resources. For more information on federal contracting, visit our website. And keep an eye out for our 2017 update to our High Risk List, expected to be issued in February, for how DOD has performed since our last update.
Read the post