Skip to main content
How does someone who is visually impaired distinguish a $1 bill from a $5 or a $20? It’s nearly impossible—U.S. paper currency is all the same size, same general design, and has the same texture. But there’s also no simple fix because people have varying types and degrees of visual impairment. For Helen Keller Deaf-Blind Awareness Week, the WatchBlog explores the 3-pronged approach the Treasury Department is taking to make U.S. currency more accessible to the visually impaired.

1. Bigger, brighter, bolder Treasury’s Bureau of Engraving and Printing is the federal agency responsible for designing and printing paper money. Starting in 1997, the Bureau added larger numbers to the back of paper currency (except for the $1 and $2 bills). The Bureau added even larger, colored numbers (referred to as "high contrast") to the $5 bill in 2008 and to the $100 bill in 2010. While these new bills are an improvement, these numbers alone may not be enough to identify the denomination, depending on lighting conditions and the amount of useful vision a visually impaired person has. 2. Tell me about it In July 2014, the Bureau began giving free currency-reader devices to eligible people. The reader, named the iBill, is a battery-operated device that can identify the denomination of a bill. For example, the iBill can indicate a $20 bill by saying “twenty” through a speaker or an earpiece, emitting two high-pitched beeps, or vibrating for two long pulses. Or, for a $5 bill, it can say “five,” emit three low-pitched beeps, or vibrate for three short pulses. 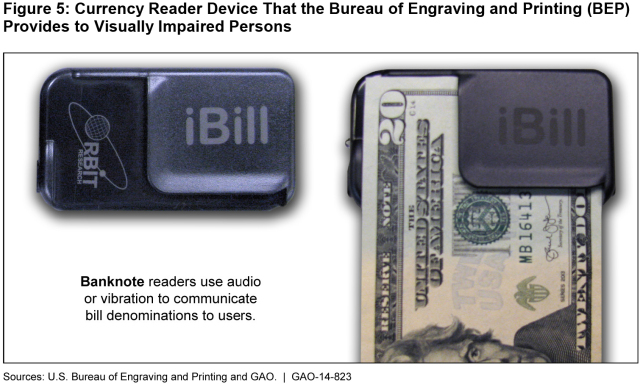 When we examined this issue in 2014, advocates for visually impaired people were generally positive about the iBill, but there were some concerns. Many visually impaired people already carry several devices to assist them in everyday life, and the iBill would be one more item to carry. It also takes time to use the device, and users have experienced errors or other technical difficulties. 3. Feel the difference Finally, the Bureau wants to add a raised tactile feature—something on the surface of a note that feels different—to enable easy identification of each denomination. Some advocates for the visually impaired said this feature would provide independence because a bill’s value could be determined without any help.

The Bureau plans to add a raised tactile feature as each denomination is redesigned, estimating that the design for the first bill with this feature could be unveiled in 2020. However, even after these redesigned bills are released, bills without the feature will likely remain in circulation for many years. To learn more about currency accessibility issues, check out our full report.
Read the post When COVID-19 struck, many offices and businesses allowed their employees to work from home, or...
Read the post For the Federal Response to COVID-19, Significant Improvements Are Needed in Leadership and Oversight

Note: This blog post has been edited to update the number and percentage of recommendations fully...