Since 1975, the Individuals with Disabilities Education Act has helped school-aged children with disabilities obtain an education. Last fiscal year, it helped nearly 7 million students participate in classes and engage in school-based activities.

But are educators spending more time filling out paperwork for IDEA than they are in the classroom?

As this school year comes to a close, today’s WatchBlog looks at efforts to lighten IDEA’s administrative workload.

The idea behind IDEA

IDEA provides federal grants to states to help them meet the additional costs of providing special education and related services to students with disabilities. Last fiscal year, this totaled $11.5 billion in federal funds.

But IDEA is more than funding for special education. It requires that states provide free public education to eligible students in the “least restrictive environment”—meaning with other children without disabilities, to the extent appropriate.

IDEA also provides certain safeguards to children and parents, such as written notifications if a child’s school wants to change where he or she is placed.

And, for each student, states and schools must document an individualized education plan that outlines the student’s academic achievement and functional performance, sets measurable goals for the school year, and describes what the student will need to meet those goals.

Yet all of these safeguards and supports come with a lot of paperwork, not all of which is directly related to improving education outcomes for children. 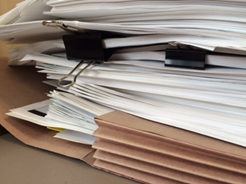 To help lighten the load, Congress included a few changes when it passed the 2004 reauthorization of IDEA, including

However, we found that states largely didn’t take advantage of these changes. For example, no states applied for the pilot programs, telling us that they didn’t see enough benefit and funding to make it worthwhile—especially because the states would then be on the hook to help evaluate the pilots.

In addition, while some states and school districts took advantage of at least one of Education’s model forms, states more often used those forms to develop their own models.

For more information on Education and state efforts to reduce the administrative burden of IDEA—and stakeholder views—check out our full report. Without a change in law or policy, the gap between the amount of money the federal government...
Read the post GAO’s workforce is organized largely by subject area, with most employees working in one of our 15...
Read the post

Asking the Right Questions: How Many Medicare Participants Are At Risk of Harm from Prescription Opioids?

Over 14 million Medicare participants received opioid prescriptions in 2016—which cost the...