Want to vote by absentee ballot in the upcoming November 2016 general election? If you’re an American living or serving abroad, now is the time to register and request a blank ballot.

But what happens next? Today’s WatchBlog shares what we found when we examined the Department of Defense’s Federal Voting Assistance Program for uniformed and overseas absentee voters.

Under the Uniformed and Overseas Citizens Absentee Voting Act, DOD is generally responsible for establishing and maintaining a program to help eligible citizens overseas to vote.

And the help is needed. Servicemembers and other American citizens living overseas face a complex, multistep process to vote in a U.S. election. Federal, state, and local governments have to coordinate to make it happen.

Figure 2: Absentee Voting Is a Multistep Process for Military and Overseas Voters

The ballot is in the mail

One long-standing problem for overseas voters is the unpredictable delivery of their mailed ballots. 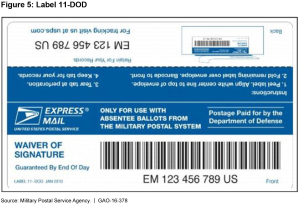 The Election Assistance Commission estimated that 8,500 of the 146,000 ballots voters submitted through DOD were rejected in 2014.

To help with these sorts of problems, DOD’s program offers wallet cards, voting guides, and a website to remind people about election dates, requesting ballots, and other key information needed to vote.

However, many people don’t know these resources are available. Surveys and focus groups found that many overseas voters didn’t know their registration deadlines—a key piece of information given how these can vary by state.

We also made multiple recommendations to DOD to improve planning for its voting assistance program. For example, we recommended that the department set time frames for when it would take actions to address long-standing challenges, as well as fully implement certain leading practices into its day-to-day operations.

For more information about the challenges DOD has identified and its plans to address those challenges, check out the full report.