Skip to main content
Usually, April 15 is the deadline for filing federal individual income tax returns. However, this year, due to Washington, D.C.’s celebration of Emancipation Day on Friday, April 15, the deadline for most of the nation is today, April 18. (Due to Patriot’s Day in Maine and Massachusetts, their deadline is April 19.) Last tax season was a rough one for both the IRS and taxpayers. So what’s in store this year? Today’s WatchBlog offers the E-Z version of some of the ongoing problems we’ve found at the IRS. Telephone service If you tried to get through to the IRS on the phone with questions during the last filing season, chances are you weren’t able to. And if you did, you likely had to wait—average wait times were more than 30 minutes. These wait times have been steadily growing in recent years. 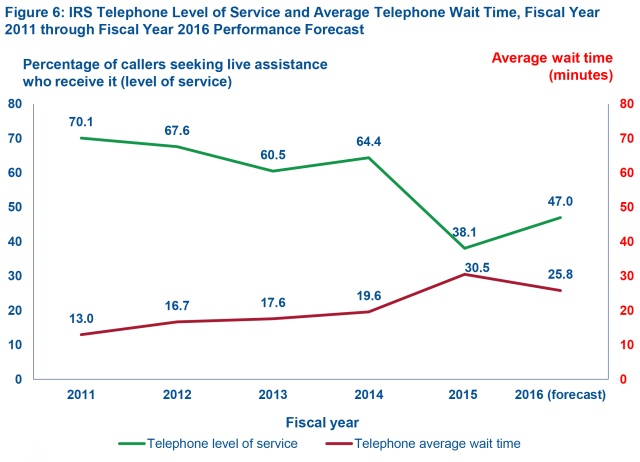 However, IRS’s telephone service is expected to have improved this year. As we reported this month, the IRS projected that nearly half of callers should receive live assistance. While that doesn’t mean all calls got answered, these are much better odds than last year. Moreover, the average telephone wait time should have decreased to about 26 minutes—the first decline in years. Both improvements are because the IRS has devoted additional staff to answering calls, as well as offered overtime to its staff after receiving additional funding. Identity theft refund fraud Did you file your taxes this year, only to find that someone beat you to it? If so, you may be a victim of ID theft refund fraud. The IRS paid an estimated $3.1 billion in fraudulent tax refunds in 2014. The agency also estimates that it prevented or recovered $22.5 billion. As with all fraud, though, the full extent of the problem is unknown.

Identity theft refund fraud has been an evolving  problem for the IRS. Between 2011 and 2015, calls to the IRS about such fraud increased 430%. Unfortunately, once fraudsters have your personal information for fraudulent tax refund purposes, they can use it to commit even more crimes. To combat this problem, the IRS convened a Security Summit in 2015 to try to leverage help from industry partners, including tax prep companies, state tax agencies, and others. The summit helped the IRS identify further fraud prevention and taxpayer education activities, among other things, to address some of the challenges we’ve mentioned. Information security The IRS has more information about you than you may realize. In addition to your name, Social Security number, and what you report on your tax forms, the IRS also gets information from your employer, businesses, stockbrokers, and others. While the agency places a number of controls on this information to limit who can access it, recent data breaches at the IRS highlight how vulnerable your tax information can be. We recently made 45 recommendations to address weaknesses we found in the IRS IT systems meant to protect sensitive taxpayer and financial data. This is in addition to the 49 outstanding recommendations we already made. As of the end of last fiscal year, 21 of our information security recommendations to the IRS were either closed, which means the IRS adopted them, or no longer relevant. Listen to Greg Wilshusen, a director in our Information Technology team, discuss some of these technical issues:   What’s next? The IRS received nearly $300 million in additional funding for fiscal year 2016 to help combat some of its problems. Almost a third of this money went toward improving customer service, including specialized phone assistance for ID theft victims. You don’t have to call for some information, though, as IRS has other identity protection resources available. The agency also reported that it added the equivalent of more than 4,000 full-time staff, and spent about $470 million on all refund fraud and ID theft activities last fiscal year. We believe that if the IRS implemented all of our past and new recommendations, the agency would be in a better position to improve its phone service, combat ID theft refund fraud, and keep your data secure. For a high-level summary of our key recommendations, as well as more information on the problems we found and steps the IRS is taking to address them, read the U.S. Comptroller General’s recent testimony to Congress.
Read the post Was the Department of Homeland Security adequately prepared for the January 6 attack on the U.S...
Read the post The Quest to Combat Insider Threats at Our Nation’s Airports

For many, the presence of Transportation Security Administration (TSA) personnel screening...
Read the post