In 1961, President Kennedy signed an executive order establishing the Peace Corps. For 55 years, volunteers have been committing to 2-year assignments to help communities in as many as 140 countries.

But what happens when volunteers return to the United States? Today’s WatchBlog shares what we found when we examined health benefits for returned Peace Corps volunteers.

And, since they’re abroad for 2 years, volunteers are considered to be working around the clock—24 hours a day, 7 days a week. 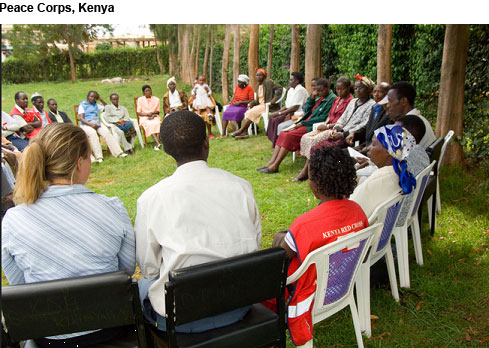 After completing their service, volunteers typically return to the United States. If they returned sick or injured as a result of their service, they may be able to get their medical costs reimbursed through the federal workers’ compensation program. This also holds true if their work aggravated a pre-existing illness or injury.

Like other injured workers, returned Peace Corps volunteers must apply for benefits with the Department of Labor—the agency responsible for the federal workers’ compensation program. If approved, DOL either pays the volunteer’s medical provider directly or reimburses the volunteer for expenses. Then, DOL bills the Peace Corps for those benefits.

In the past 5 years, the Department of Labor paid about $41 million to reimburse medical expenses for 3,305 returned Peace Corps volunteers. Where did that money go? As you might imagine, many returned Peace Corps volunteers received benefits for infectious or parasitic diseases. Dental problems were prevalent, too. As a group, returned volunteers were also more likely than other federal employees to receive benefits for service-connected mental, emotional, and nervous conditions. Applying for benefits to treat these types of conditions sets them apart from most other federal employees getting workers’ comp.

Under these unique circumstances, both the Peace Corps and the Department of Labor could do more to make sure returned volunteers get the care they need. The Peace Corps requires volunteers to sign a document stating that they were informed about their potential eligibility for workers’ comp, but simply being aware of benefits may not be enough to access them. We reviewed a sample of denial letters sent to returned volunteers from 2009 to 2011 and found that claims were most commonly denied because they either

In 2012, we recommended that the Peace Corps and the Department of Labor monitor access to and quality of health care benefits for returned volunteers. As of August 2015, both agencies appeared to have made progress on these tasks, but not enough for us to close the recommendation.

News headlines during the pandemic have highlighted the disproportionate effect of COVID-19 across...
Read the post

The Future of the Federal Workforce

Today we released our 2019 High Risk List, which includes 35 areas that we consider to be at high...