Skip to main content
Outside of the government, people may think all feds are the same. Inside, however, is an entire classification system for government workers. This was launched back in 1949, and, since then, much has changed. Today’s WatchBlog takes a look at how well the General Schedule classification system is keeping up with the times. Covering the present… Last we counted, the GS system covered more than 1.5 million federal employees working in 420 occupations—primarily the government’s civilian, white-collar workforce. Behind those numbers is a guiding principle of the GS system: employees should earn equal pay for substantially equal work. An employee’s pay is generally standardized across the government by accounting for his or her duties, qualifications, experience, and other such factors. The GS system also helps the government manage its human capital needs. For example, the schedule helps find and fill skill gaps and manage performance. 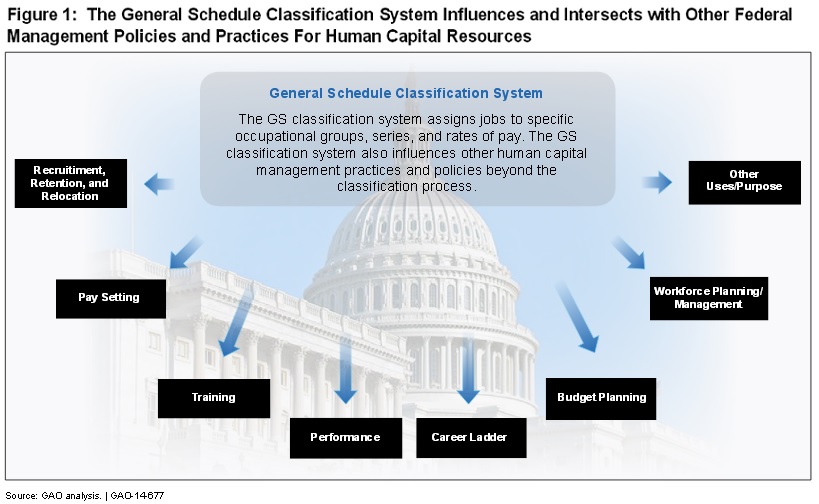 (Excerpted from interactive graphic in GAO-14-677. To use the interactive features, download the report PDF, go to p.6 of the report, and roll your mouse over each personnel activity to see more information regarding how the GS system influences it.)

…while living in the past Almost since its inception in 1949, questions have been raised about whether the GS system can keep pace with the changing demands of federal service. Those concerns persist. Consider cybersecurity and other tech fields. They didn’t exist when the classification first started, but today they’re critical to the federal workforce. To address such concerns, Congress and the Office of Personnel Management have authorized alternative personnel—and pay—systems. Those systems tend to cover, increasingly, federal jobs requiring advanced degrees, particularly in science, technology, engineering, and math—the so-called STEM fields. Wanted: A modern classification system The Office of Personnel Management is responsible for establishing new occupational standards, as well as revising existing ones. OPM and the Chief Human Capital Officers Council established a group to identify and address certain gaps in mission-critical occupations, including cybersecurity and STEM. We’ve identified adaptability as 1 of 8 important attributes of a modern, effective classification system. While OPM has various efforts to help agencies with their classification questions, OPM may not be adapting as fast as the world is changing. To ensure an agile and modern federal workforce, the agency needs to better identify and address skills gaps. While OPM works to do that, we’ll continue to examine human capital issues throughout the government.
Read the post The Danger of Lead Paint Hazards in Two HUD Programs