Skip to main content
Safe, clean water is essential for human and environmental health. However, our supply of clean water is at risk from pollution and droughts, like the current one in California. And, even when clean water is available at the source, aging infrastructure may affect water quality or supply. On the 45th anniversary of Earth Day, the WatchBlog directs attention to some of our work on water issues. Freshwater Shortages and Availability The nation's water bodies have long supplied Americans with abundant freshwater. However, in May 2014, we found that water managers and experts are concerned about issues like: The first two issues are longstanding concerns, remaining largely unchanged since our earlier report in 2003. We also reported that water shortages are expected to continue into the future. In particular, 40 of 50 state water managers we surveyed expected shortages in some portion of their states, as shown below. We also found that uncertainty about economic growth and land use complicates state efforts to plan for these shortages. 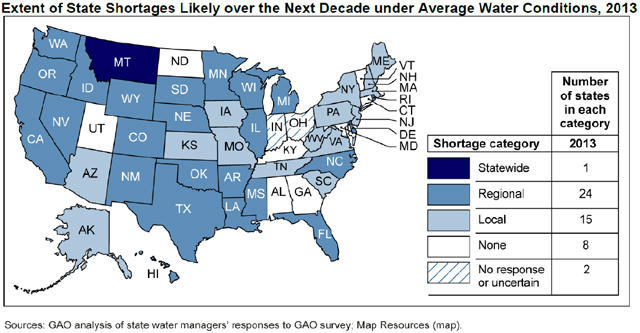 Pollution and the Clean Water Act Our lakes, rivers, and other bodies of water may be at risk for pollution from a variety of sources. The figure below shows how water bodies may become polluted, including 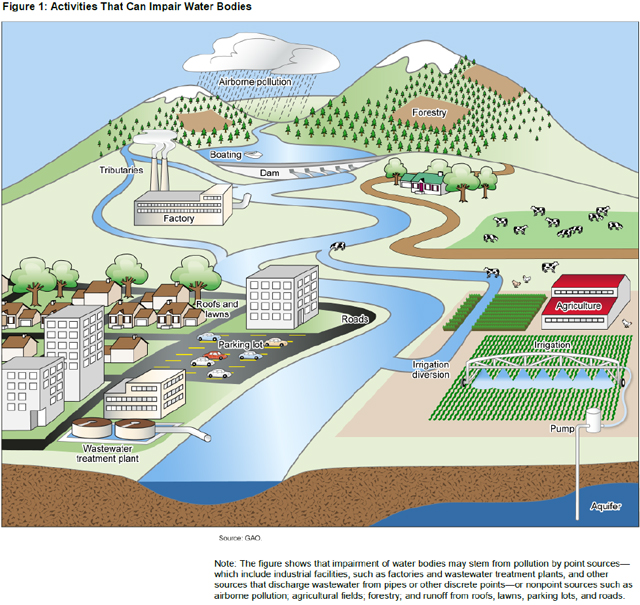 Under the Clean Water Act: In December 2013, we concluded that more than 40 years after passing the Clean Water Act, many of the nation’s bodies of water are still polluted, and the goals of the act are not being met. For example, while states have completed more than 50,000 TMDL documents—outlining the waters at risk for pollution, the sources of pollution, and how to address and monitor the risk—many didn’t demonstrate that they would achieve water quality standards, based on water resource experts' reviews of a sample of the documents. Water Infrastructure Even when clean water is available at the source, aging infrastructure may affect water quality or supply. In March 2015, we testified about efforts to maintain and upgrade the nation’s aging and deteriorating drinking water and wastewater infrastructure. EPA estimated that, nationwide, infrastructure repairs and replacement will cost While many rural communities face significant challenges financing upgrades to water systems, we found 7 federal agencies provide funding or technical assistance to help. Interested in more? Check out our Key Issues pages on managing natural resources, water quality, and the energy-water nexus.
Read the post