Skip to main content
The housing finance market is more than just homebuyers, sellers, and real estate agents—it’s a complicated landscape of borrowers, lenders, securitizers, servicers, and investors. The complexity of housing finance played a major role in the 2007-2009 financial crisis, and poses challenges for reforming the system. We have reported on changes to the housing finance system, and offered a framework to assess the impact of potential changes. From that work, here’s a brief explanation of the system and players in the 4 major phases of a mortgage. 1. Origination Homebuyers take out mortgages to finance the cost of a new home, and homeowners refinance their existing mortgages. This is called “origination” because this is where a mortgage starts—or originates. However, there is more to origination than the borrowers and lenders, as shown below. For example, the bank that originally made the loan may sell it in what’s called a “secondary market.” 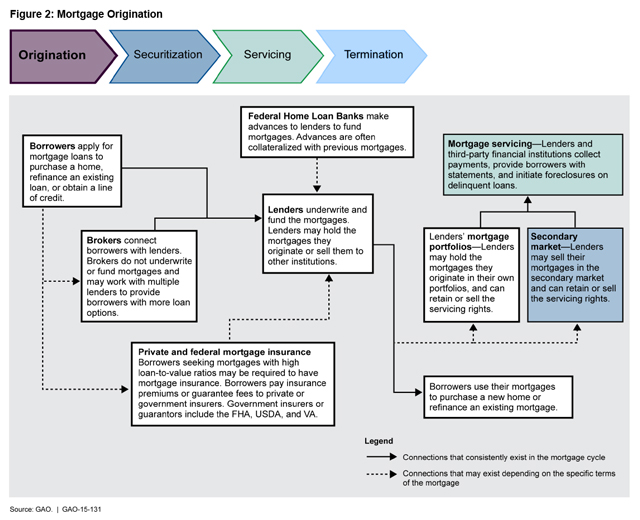 If a mortgage is sold into the secondary market, as described above, it could be pooled or bundled into “mortgage-backed securities.” Such mortgages are said to be securitized. Securitizing mortgages allows them to be traded on securities markets, similar to the trading of stocks and corporate bonds. This is intended to allow lenders to obtain funds to make more loans, lower mortgage rates for borrowers, and provide those buying the securities with additional investment options. Most mortgages are securitized—almost 80% of new mortgages in 2013. Securities are generally issued by Fannie Mae and Freddie Mac, or by private financial institutions, as shown below. 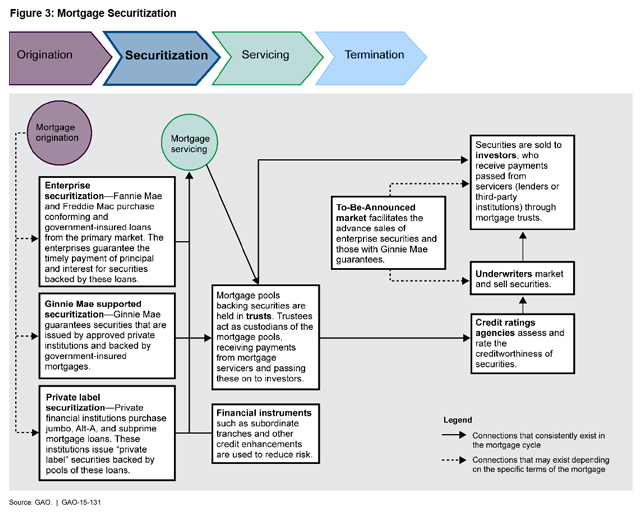 Throughout the life of a mortgage, it is “serviced.” Servicing refers to a variety of administrative duties, such as sending statements and tax documents to borrowers, answering customer service inquiries, and collecting mortgage payments. Mortgages may be serviced by the lenders that originated them or by third parties that specialize in mortgage servicing. 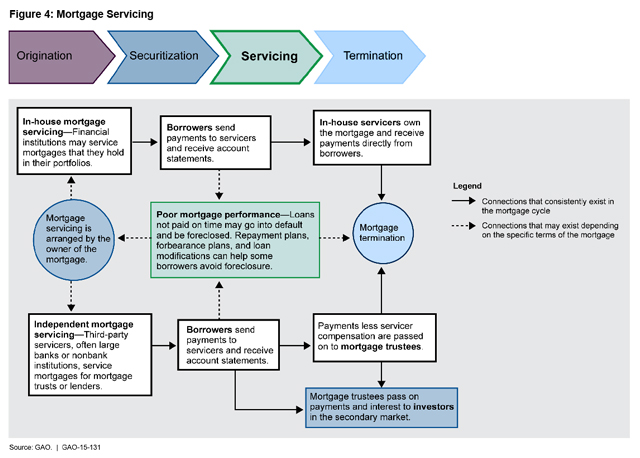 4. Termination Optimally, a mortgage is terminated after the borrower fully repays the amount owed, as shown below. This happens when a borrower If a borrower fails to make a payment for 90 days, the mortgage goes into default, which may result in termination by foreclosure. 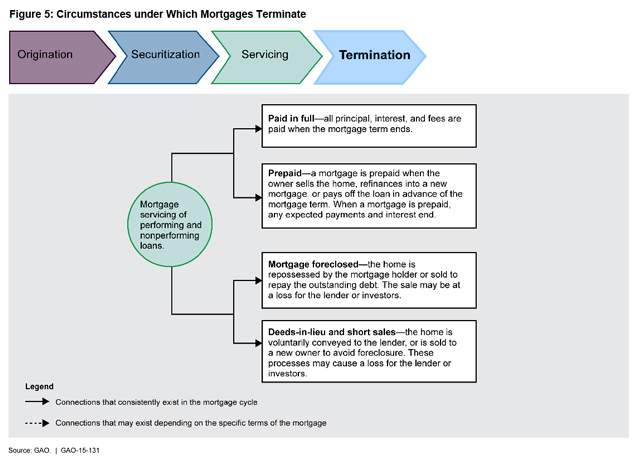 With so many players involved in housing finance, if something goes wrong, it can be both difficult to fix and challenging to prevent from happening again. Prior to 2007, mortgage defaults and foreclosures were relatively low, but by the end of 2013, more than 1 million homes were in foreclosure. To learn more, check out the videos, reports, and other resources on our Key Issues page on the Federal Response to the Foreclosure Crisis.
Read the post