A warming climate is changing the Arctic’s environment. The decline in summer sea ice, which reached its lowest point on record in 2012, has made some Arctic waters navigable for longer periods of time.

Excerpted from GAO-14-435. To interact with this graphic, download the full report.

We recently issued two reports on implications of these environmental changes, focused on U.S. arctic maritime infrastructure and the U.S. participation in the Arctic Council.

The recent environmental changes have created challenges for the Arctic ecosystem and the people who rely on it for their culture and sustenance. At the same time, the changes have also created potential economic development opportunities through commercial shipping and fishing, cruises, oil and gas development, and mining. Check out our video on transportation in Arctic Alaska to see some of the challenges:

We reported on stakeholders’ roles and priorities in planning, developing, and managing U.S. Arctic maritime infrastructure. Industry representatives told us they expect their maritime activities in the U.S. Arctic will be limited for the next 10 years, due to the general challenges of operating in the Arctic and various uncertainties in specific industries. 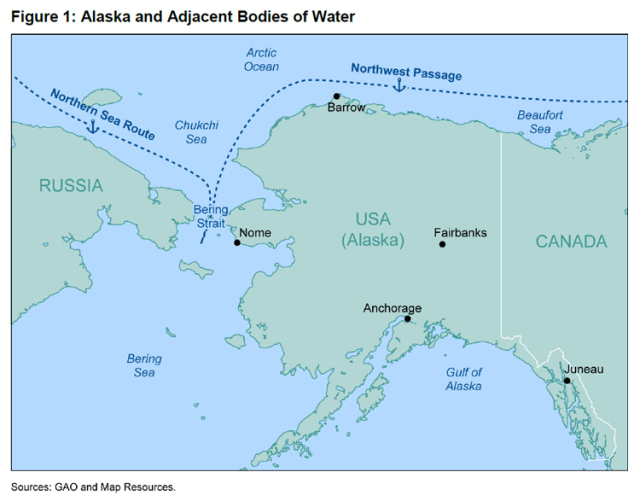 While the private sector expects maritime activities to be limited over the next 10 years, federal government agencies already have some plans under way to support future maritime infrastructure investments. For example:

U.S. Participation in the Arctic Council

We also recently reported on U.S. participation in the Arctic Council, an intergovernmental forum to promote cooperation and coordination among the 8 Arctic countries—Canada, Denmark, Finland, Iceland, Norway, Russia, Sweden, and the United States—with the involvement of Arctic indigenous groups and stakeholders. Through the Council, participants conduct projects and assessments to advance the global understanding of Arctic environmental changes and the related challenges and potential economic development opportunities. The Council also identifies actions to address these challenges and opportunities.

The United States will take over the rotating Council chairmanship in 2015, with the Department of State as the lead agency. We recommended ways that the United States could enhance its participation in the Council, particularly in preparation for the chairmanship.