Skip to main content
GAO’s workforce is organized largely by subject area, with most employees working in 1 of 14 mission teams. Today we’ll be putting the spotlight on the Forensic Audits and Investigative Service (FAIS) team, which focuses on the identification and prevention of fraud, waste, and abuse across the federal government. FAIS is unique within GAO because in addition to auditors and analysts, it includes a team of criminal investigators that perform special investigations and security assessments. FAIS also maintains FraudNet, an online system where federal employees, contractors, and members of the general public can report allegations of fraud, waste, abuse, or mismanagement of federal funds. Reports FAIS’s work includes three main types of assessments: To identify fraud, waste, and abuse, FAIS conducts forensic audits. We define a forensic audit as a systematic evaluation of the effectiveness of internal controls over a program, process, or policies and procedures. Forensic audits identify ineffective controls and vulnerabilities and use data mining and investigations to expose areas of fraud, waste, abuse, and security vulnerabilities to show the effect of inadequate controls. For example, in 2013, we reported that the Social Security Administration (SSA) made an estimated $1.29 billion in potential disability benefit overpayments from December 2010 to January 2013. We compared SSA data with earnings data from the National Directory of New Hires to identify individuals who earned wages and received disability benefits at the same time. Special investigations may involve undercover work and vary widely, from purchasing counterfeit military supply parts on the Internet to testing the quality of paid tax preparers. As part of a 2012 report on driver’s license security, our investigators used counterfeit out-of-state driver’s licenses and birth certificates to obtain licenses in 3 states under fictitious identities, which helped identify weaknesses in the system. FAIS uses covert testing and overt assessment techniques and frequently works with other GAO teams to assess vulnerabilities in national and homeland security. For example, in 2011 we reported on security vulnerabilities at 13 general aviation airports. The Department of Homeland Security agreed to work with the general aviation community to address those vulnerabilities. Impact In fiscal year 2013, FAIS work identified more than $1.4 billion in financial benefits for the federal government, as well as 60 other efficiencies. Through special investigations and forensic audit work, FAIS provided support for 3 congressional hearings with other GAO teams. A Closer Look at an FAIS Report: Security Clearances for People with Tax Debt As of October 2012, about 4.9 million civilian and military employees and contractors held security clearances. Federal laws do not prohibit an individual with unpaid federal taxes from holding a security clearance, but tax debt poses a potential vulnerability. People who are financially overextended are considered to be at risk of having to engage in illegal acts for money. Tax debt is one measure of a security clearance applicant’s financial condition, but currently, identifying an applicant’s tax debt is difficult. 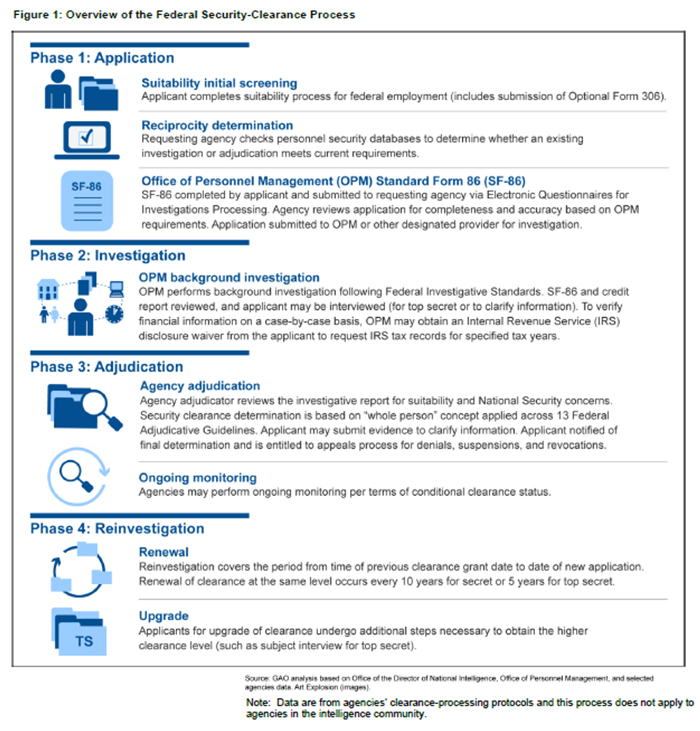 We compared security clearance data from the Office of Personnel Management with tax debt data from the Internal Revenue Service and found that about 8,400 out of 240,000 individuals judged to be eligible for a security clearance from April 2006 to December 2011 had tax debt. Among them, they owed approximately $85 million in unpaid federal taxes as of June 2012. We recommended that the Office of the Director of National Intelligence study the feasibility of regularly obtaining tax debt information from IRS for the purposes of investigating security clearance applicants and monitoring current clearance holders' tax-debt status.
Read the post