A third of foreign graduate students studying STEM at U.S. universities are Chinese nationals—some with access to sensitive research.

U.S. agencies have identified several factors indicating the types of students—such as being from a country of concern like China—who may pose a greater risk of transferring technology to foreign entities. Immigration and Customs Enforcement keeps a database related to these factors but hasn't assessed if it needs updating to capture additional data related to these risks. Also, some ICE data that may indicate students' access to technology is incomplete. 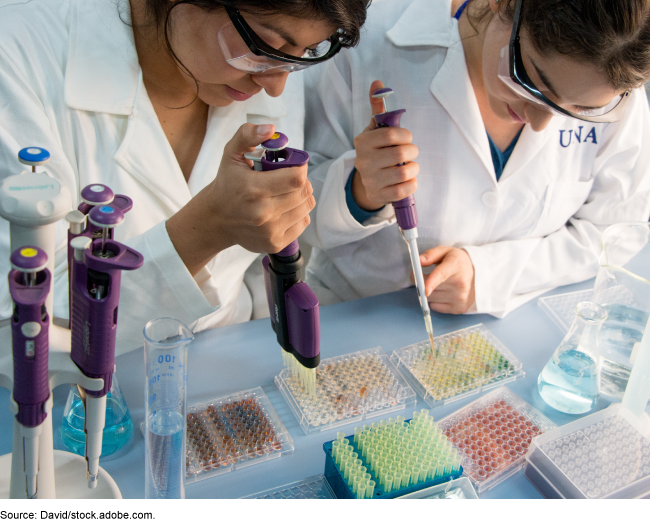 U.S. Immigration and Customs Enforcement (ICE) has incomplete data that may indicate whether foreign students and scholars pose risks for transferring technology from U.S. universities to foreign entities. ICE's foreign student and scholar database contains data on the number of graduate students from countries of concern for technology transfer, such as the People's Republic of China (PRC). Graduate students studying in a science, technology, engineering, and math (STEM) field have also been identified as more likely to be involved in sensitive research (see fig.). However, ICE has not established milestones to complete a required assessment of whether it needs to modify its database to collect additional data related to some risk factors, in part because it has focused available resources on other priorities. Further, information related to students' employment in the U.S., which may indicate whether they have access to technology, is incomplete. Completing the assessment and improving student employment data could strengthen U.S. government efforts to identify and assess technology transfer risk.

To safeguard university research from transfer for the benefit of the PRC and other countries, U.S. agencies that fund research increased investigations of researchers for fraud and failures to disclose potential sources of foreign influence, according to agency data. These investigations have resulted in the removal of individuals from research positions because of undisclosed affiliations, such as receiving funding from a PRC-affiliated institution. While agency officials acknowledged concerns related to racial bias in their investigations involving China, they emphasized that no decisions are based on individual characteristics such as nationality or visa status. Officials also noted that the subjects of investigations were more likely to be permanent university employees than visiting foreign students and scholars.

This is a public version of a sensitive report GAO issued in August 2022. Information on the results of the Department of State's process for adjudicating visa applications for students and scholars who may pose a risk of transferring university research, the PRC's talent recruitment and scholarship programs, ICE enforcement efforts, and detailed investigations data that State, ICE, and the Department of Defense deemed sensitive has been omitted from this report.

The federal government spends billions of dollars each year on research conducted at U.S. universities. Foreign students and scholars contribute to this research. For example, about 723,000 Chinese nationals participated in graduate-level STEM programs from 2016 through 2020. Recent reports have noted the importance of, and challenges in, combating undue foreign influence, particularly from the PRC, while maintaining an open research environment.

GAO was asked to review agency efforts to counter PRC attempts to transfer federally funded research from U.S. universities. This report (1) assesses the extent to which agencies have identified and collected data related to characteristics of foreign students and scholars in the United States that may indicate risk of transferring university technology and (2) describes selected agency efforts to counter such transfers for the benefit of PRC-affiliated entities. For 2016 through 2020, the most recent years for which data were available, GAO analyzed ICE and State data and investigations information from the five agencies that provide the most federal funding for university research. GAO also reviewed relevant policies and interviewed agency officials.

GAO is making two recommendations to ICE to establish milestones for a required assessment and improve data related to factors that may indicate risk of technology transfer. ICE concurred with the recommendations.