U.S. school children generally have higher rates of vaccination to protect them from preventable illness compared with adults.

We found gaps in adult rates for flu, shingles, tetanus, and pneumococcal (prevents pneumonia and more) vaccines. Among other things:

Health and Human Services is using social media and its website to raise public awareness on the importance of being vaccinated. 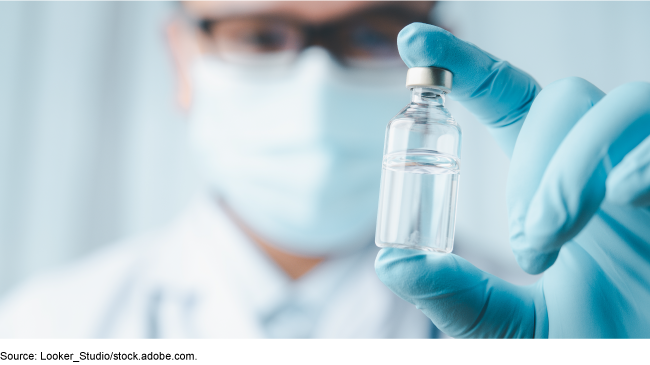 Based on survey data it reviewed, GAO estimated that adults' receipt of four routine vaccines at the ages they are recommended for all adults—flu, pneumococcal, shingles, and tetanus—varied by type of vaccine, state, and other factors, such as race and ethnicity.

Factors stakeholders identified as affecting routine adult vaccination rates included the extent to which providers screen adults for vaccines, adults' use of health care services, and the cost of vaccines for certain adults. For example, a full series of the shingles vaccine cost certain Medicare beneficiaries about $100 on average in 2021.

GAO found that the Department of Health and Human Services' (HHS) has a variety of efforts to improve adult vaccination rates. These efforts include raising public and provider awareness of the importance of vaccines and partnering with organizations, such as those representing health care providers, to encourage vaccination. GAO also found that 45 states had programs offering free routine vaccines to certain adults. These programs varied across a number of factors.

The U.S. has made significant progress against vaccine-preventable diseases. However, gaps in receipt of recommended vaccinations—especially among adults—has resulted in preventable disease, disability, and death. While children are guaranteed coverage of routine vaccines, certain adults have limited vaccine coverage, or may face out of pockets costs that contribute to lower vaccination rates. The COVID-19 pandemic has also contributed to a decline in the receipt of routine vaccines.

GAO (1) analyzed national survey data for 2019 and 2020—the most current available at the time—on the receipt of four routine vaccines at the ages recommended for all adults: 18 years and older for flu and tetanus, 50 years and older for shingles, and 65 years and older for pneumococcal; (2) interviewed 13 stakeholders representing a range of perspectives on vaccination, including providers and vaccine manufacturers; (3) collected information from all states on programs that offered free routine adult vaccines; and (4) reviewed HHS documents and interviewed HHS officials.

As the Next Round of COVID Boosters Become Widely Available and Flu Season Begins, What Do We Know about Adult Vaccination Rates?