During the COVID-19 pandemic, historic job losses and demand for benefits worsened existing problems in the unemployment insurance system. Millions of workers faced delays in receiving benefits while the risk of payment errors, including those resulting from fraud, greatly increased.

We see an urgent need to address persistent unemployment insurance system issues that were exacerbated in the pandemic. We are adding this area to our High Risk List and recommending that Labor develop a plan for transforming this system. 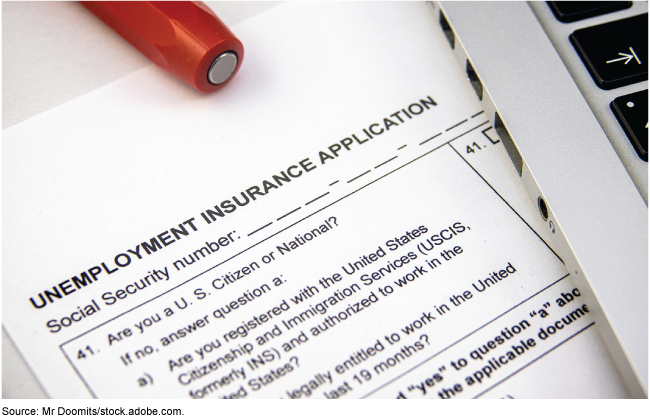 GAO and others have reported that challenges with Unemployment Insurance (UI) administration have affected states' ability to effectively meet the needs of unemployed workers, both historically and during times of economic downturn—such as the COVID-19 pandemic. Reported challenges with program design and variation in how states administer UI have contributed to declining access and disparities in benefit distribution. In the pandemic, challenges emerged relating to providing customer service, timely processing of claims, and implementing new programs. Moreover, GAO, the Department of Labor (DOL), and the DOL Office of Inspector General have reported on the need to modernize state IT systems.

The risk of UI improper payments, including from fraud, greatly increased during the pandemic. Prior to the pandemic, DOL regularly reported billions of dollars in annual estimated improper payments in UI, and it reported an increase from $8.0 billion (9.2 percent improper payment rate) for fiscal year 2020 to $78.1 billion (18.9 percent improper payment rate) for fiscal year 2021. According to DOL, historically, the primary causes of improper payments related to eligibility determination issues, such as providing benefits to those who had returned to work and failed to report their earnings. However, DOL stated that during the pandemic, increased identity theft was a main cause. Total UI improper payments are not known partly because DOL has not yet reported estimates for certain pandemic UI programs. States have also struggled with incomplete reporting of billions of dollars in identified overpayments. The CARES Act UI programs created new, and increased existing, fraud risks. From March 2020 through January 2022, at least 146 individuals pleaded guilty to federal charges of defrauding UI programs and charges were pending against at least 249 individuals. As a result of the increase in fraud-related cases during the pandemic, federal and state entities continue to investigate UI fraud.

These extensive challenges pose significant risk to UI service delivery and expose the UI system to significant financial losses. Based on GAO's findings—including many open recommendations in this area—GAO has determined that the UI system should be added to GAO's High-Risk List. DOL has some activities planned and underway for the UI system, such as creating a UI modernization office and implementing strategies aimed at reducing risk; however, many long-standing issues remain unaddressed. Leaving these issues unaddressed will heighten the risk of the UI system not meeting fundamental program expectations of serving workers and the broader economy, and may undermine public confidence in the responsible stewardship of government funds.

Participants in stakeholder panels GAO convened identified various options for transforming the UI system. Options include changes to program design to better target support, improvements to infrastructure, and enhancements to program integrity—e.g., tightening federal standards for state UI implementation, such as those for eligibility, benefit amounts, and duration; improving and modernizing IT systems; and obtaining additional data sources to identify fraudulent claims. In addition, GAO identified broad considerations to help policymakers and others assess key aspects of different options for transforming UI programs and addressing related risks. Such considerations include the comprehensiveness and flexibility of potential transformations.

A high-risk designation is intended to help spur progress in areas needing transformation. The UI system has faced long-standing challenges with effective service delivery and program integrity. The historic levels of job loss during the COVID-19 pandemic worsened existing challenges. Congress created four new UI programs to support workers during the pandemic. However, unprecedented demand for benefits and the need to quickly implement the new programs presented challenges for states and increased risks of improper payments, including from fraud.

This report examines (1) challenges in responding to the needs of unemployed workers and economic changes; (2) risks of improper payments, including from fraud; (3) the extent to which UI experienced impaired performance and financial loss; and (4) potential options for UI transformation suggested by stakeholder panels.

GAO recommends that DOL develop and implement a plan for transforming UI that meets GAO's high-risk criteria for transformations. DOL agreed with the recommendation and described actions it is taking to address it.