Most of the pavement on our nation's highways—covering about 220,000 miles of roads—is in good or fair condition. But highway pavement is less likely to be in good condition in urban areas, localities with higher family poverty rates, and areas with higher percentages of underserved racial and ethnic populations. 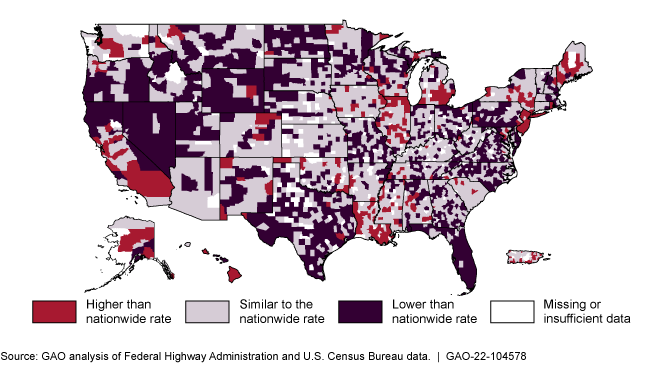 Most pavement on the National Highway System is in good or fair condition, but the condition varies widely across and within states. Moreover, GAO found that pavement condition varies based on certain community characteristics. Even when controlling for factors such as climate type and traffic density, pavement is less likely to be in good condition on roads in census tracts with:

Probability of Pavement in Good Condition on the National Highway System by Underserved Ethnic and Racial Population Rate and Population Density Category, 2019

In response to executive orders, DOT is determining how to assess equity impacts for all of its programs, but, as of June 2022, has not identified what pavement-specific analyses it will conduct, if any. Additional analyses of poor pavement concentrations and the differences by community characteristics could help FHWA understand why these conditions are occurring. These analyses could also help FHWA identify strategies to help ensure that all communities have safe and equitable pavement conditions.

House Report 116-106 included a provision for GAO to review issues related to pavement condition of the National Highway System.